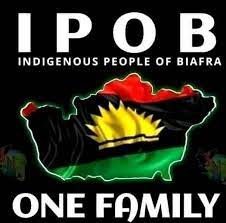 There was pandemonium and confusion in Enugu, the Enugu State capital this Monday morning as over 50 members of Indigenous People of Biafra, IPOB, stormed the Holy Ghost area of Government Reserved Area of the city to enforce the sit-at-home order by the outlawed organization.

Our correspondent, quoting eyewitnesses said some of the IPOB members, heavily armed, shot sporadically, sending both residents and small businesses in the area scampering and shutting down.

The stampede caused by the shooting created confusion in other areas of  Enugu city, including Trans Ekulu, Abakpa  and Airport road, forcing transporters, banks and major markets to shut down.

By late morning, other parts of Enugu State such as Awgu and Opi had become deserted with markets closed, while transporters ended the day’s business as some daring tricycle operators had their vehicles burnt.

As part of the last christmas and new year celebration, IPOB  had suspended its Monday sit- at-home  order. However, an indication that the suspension was not permanent emerged last week  when the group ordered the immediate stoppage to the sale of cows which come from the northern part of Nigeria to the south, in the south-eastern states.

IPOB had  also ordered schools in the South-East to stop singing the Nigerian national anthem and the pledge as part of its separatist agitations.

Monday’s violent enforcement of the IPOB sit-at-home order took many Enugu State residents by surprise. It was not clear whether the order was also being enforced in the South-East states.

However, the Igbo Socio-cultural group, Ohaneze Ndigbo had cautioned IPOB against these steps, warning that a negotiated position of the Igbo in the Nigerian federation was preferable to violent and anti-state activities.