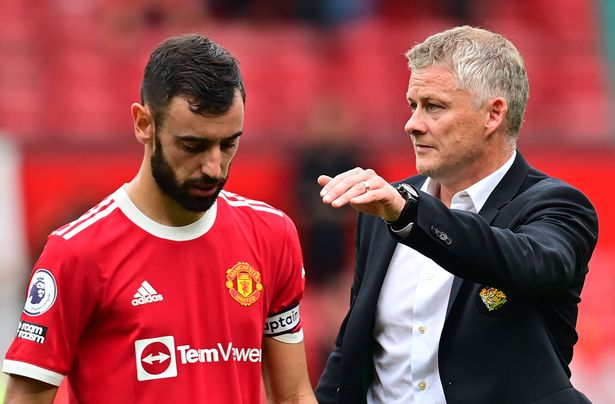 Manchester United’s title credentials have been questioned once again after a disappointing defeat to Aston Villa.

The Red Devils slumped to a 1-0 loss against Dean Smith’s men at Old Trafford as Kortney Hause scored a late winner.

The big talking point was Bruno Fernandes missing a penalty in stoppage time as the Portugal star took the spot kick ahead of compatriot Cristiano Ronaldo.

We analyse that and various other talking points in the aftermath of Saturday’s game.

The fallout from Fernandes’ fluffed penalty has been blown out of proportion and a sad indictment of football’s current culture.

The midfielder felt compelled to write a 187-word apology on Instagram for making the mistake which wouldn’t have been warranted even if he had the worst game of his life.

But he should have been the last player saying sorry for United’s poor performance against Villa. He was head and shoulders above all of his Man Utd teammates on the day and was the only one who looked like scoring for United in the 90 minutes.

Fernandes has bailed United on several occasions since he arrived from Sporting Lisbon and he shouldn’t be criticised on the rare occasion that he wasn’t able to.

Manchester United fans were not happy with the majority of their players, but Scott McTominay took the brunt of the criticism after a lackluster display.

One fan on social media called him a ‘passenger’ after he was ‘bodied’ by John McGinn and Douglas Luiz.

He gave the ball away needlessly on several occasions, adding to the narrative that United are in desperate need of a new holding midfielder.

The ‘McFred’ partnership that was seen as United’s best fit in the middle of the park has not been nearly as effective this season as the form of two of United’s most consistent performers in recent years has taken a massive slump.

Ole Gunnar Solskjaer, the manager of the club has undoubtedly improved the culture at Manchester United, but does he have what it takes to win titles?

That will be the lingering question hanging over his head until he does.

The Norwegian’s man-management is second to none and every player loves working under him which helps create a healthy environment in the dressing room.

But it’s his tactical awareness (or lack of) that hurt United once again against Villa. It was clearly a game that was not going according to plan and it seems like Solskjaer didn’t have a plan B to break down Smith’s men.

United might have registered over 20 shots, but with only four on target, their shoot on sight approach was evidently not working.

The Red Devils needed an alternative way to hurt Villa but they didn’t have that – and that’s on Solskjaer.