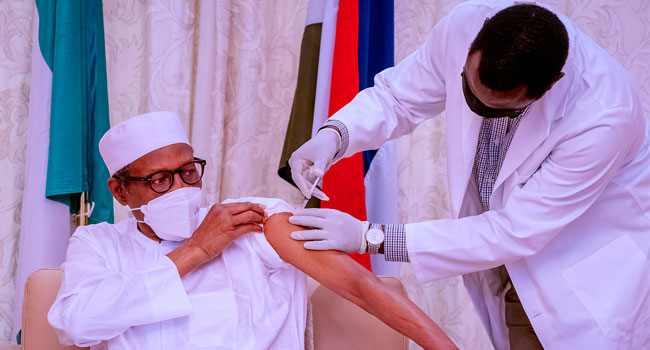 President Muhammadu Buhari has received his second dose of the AstraZeneca COVID-19 vaccine.

The President took the shot on Saturday at the State House in Abuja.

The second dose is being administered exactly 12 weeks after the first shot was taken on March 6.

The President’s innoculation was done by the Chief Personal Physician to the President, Dr. Suhayb Rafindadi Sanusi after which he was presented with the e-vaccination card by the executive director of the National Primary Health Care Development Agency, Dr. Faisal Shuaib.

The President congratulated all medical personnel for their efforts so far, noting that he is hoping that the nation would be economically disposed to inoculate every Nigerian.

The President’s first jab taken on live television as part of plans to boost public confidence as Nigeria attempts to inoculate 80million people this year.

A total of 3.94 million doses of AstraZeneca/Oxford vaccine were shipped into Nigeria on Tuesday, March 2, 2021.

Cyprian Ngong, a senior registrar at the National Hospital, was the first Nigerian to receive the vaccine when the Federal Government commenced the campaign on March 5, 2021.

President Buhari and Vice-President Yemi Osinbajo received the AstraZeneca vaccine, a day after the Federal Government launched the vaccination exercise in the country.

The Presidential steering committee announced that it aims to vaccinate 40% of eligible Nigerians and another 30% in 2022 to attain 70 percent coverage of estimated 200 million people by 2022.

Yahaya: Buhari is President of the North – Ohanaeze chieftain on COAS’ appointment