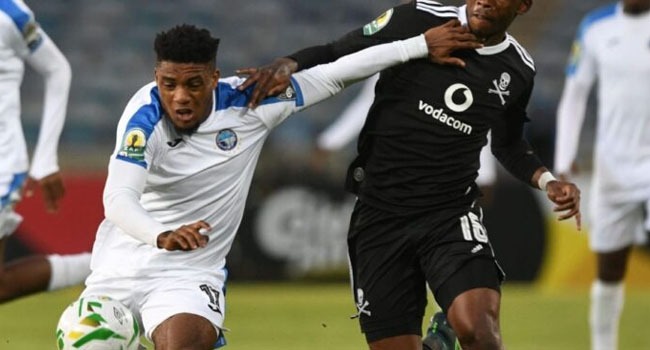 Enyimba have qualified for the quarter-finals of the CAF Confederation Cup (CAFCC) after a 95th-minute goal from Cyril Olisemah gave the Nigerian side a 1-0 win over Orlando Pirates on Wednesday night.

The Peoples Elephant needed a win going into their final Group A encounter against the South Africans to advance to the next stage of the competition.
At half-time and with the score pegged goalless, the Aba-based side were at the bottom of the group standings.

While many fans may have given up on the multiple Nigerian champions, Anayo Iwuala’s cross found Olisema; the latter wasted no time in slamming the ball past the Pirates’ goal to send his club to the next round.

Pirates had beaten Enyimba 2-1 in the reverse fixture of the encounter. Despite the loss in Nigeria, the South African club side made it to the quarters alongside Enyimba.

JS Kabylie; Jaraaf. CS Sfaxien, Cotonsport, Pyramids, and Raja Casablanca are the other teams that qualified for the quarter-finals of the tournament.

The draw for the next round of Africa’s second-tier club competition will be held on Friday, April 30th in Egypt.