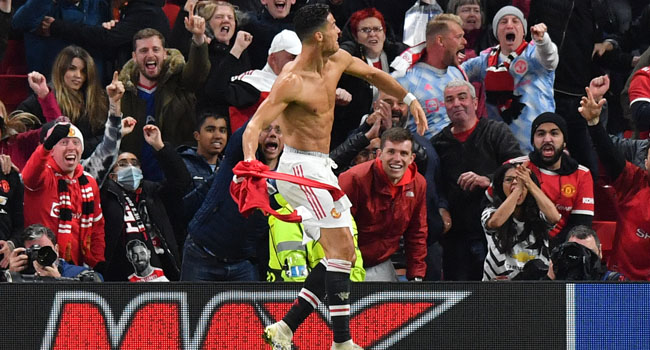 Cristiano Ronaldo headed in a late winner, as Manchester United came back from two goals down to beat Atalanta 3-2 in the Champions League on Wednesday night.

The Serie A side stunned Old Trafford as they raced into a 2-0 lead in the first half.

Mario Pasalic and Merih Demiral both scored as United failed to impose themselves in what was a must-win match at home.

However, after the break, Marcus Rashford and Harry Maguire pulled the Red Devils level, before Ronaldo rose highest to meet Luke Shaw’s cross.

Barcelona recorded their win of the season in Europe, with a 1-0 victory over Dynamo Kyiv, Bayern Munich thrashed Benfica 4-0 and Villareal beat Youngs 4-1.

Bandits Should Be Declared Terrorists, El-Rufai To FG