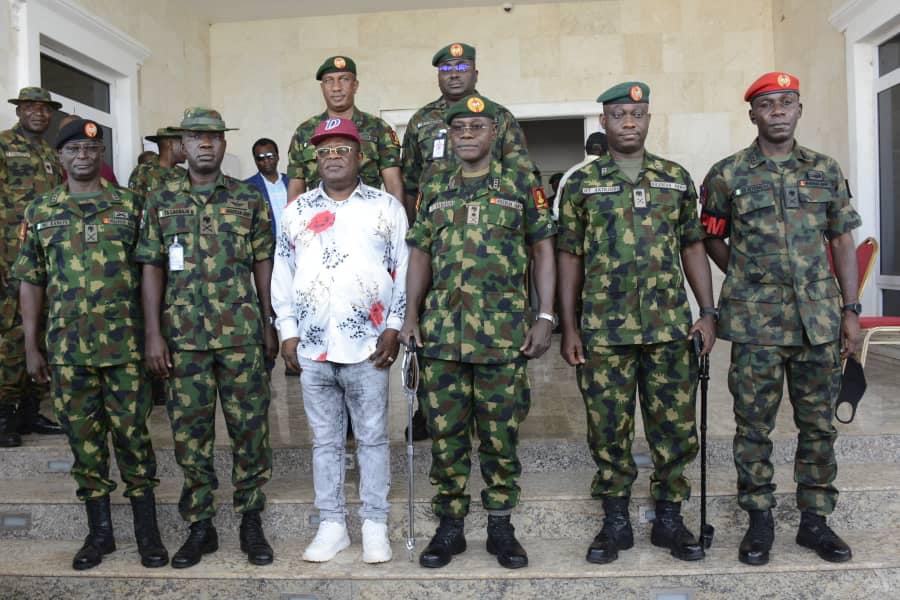 Following the flag-off of three Nigerian Army Field Training Exercises on Monday 4 October 2021 at Emene in Enugu state, south east Nigeria, the Chief of Army Staff (COAS) Lieutenant General Faruk Yahaya has commenced an operational assessment of the conduct of units and formations in Ebonyi and Anambra States respectively.

General Yahaya’s first point of call was 24 Support Engineer Regiment in Abakaliki, where he listened to operational brief from the Commanding Officer and charged the troops to be professional in their conduct during and after the exercise while assuring them of his support to carry out their tasks effectively.

In Abakaliki, the COAS paid a courtesy visit to the Executive Governor of Ebonyi State, Engineer Dave Nwaeze Umahi who commended him for his effort in stemming pockets of violence in parts of the Southeast.

The COAS on his part, expressed appreciation to the Governor and other southeast Governors for their efforts in ensuring that peace and security are restored across the southeast according to a statement by the Director, Army Public Relations, Brigadier General Onyema Nwachukwu.

The COAS proceeded on assessment to Anambra State, where he inspected Sector 5 troops of 302 Artillery Regiment and 14 Field Engineer Regiment at Igbariam, East of Anambra State. And there, the Commander, Colonel Abdulkarim Usman gave a highlight of the conduct of Exercise GOLDEN DAWN in his Area of Responsibility.

The COAS expressed satisfaction so far, on the conduct of the exercise and commended the synergy among the security agencies. He urged the troops to focus on the objectives of the Exercise in order to curb violence and other criminal activities across the southeast in particular and the country in general.

Gen Yahaya admonished the troops to respect the rights of members of their host communities and all citizens, adding, that the NA has zero tolerance for indiscipline.