HomeNIGERIADSS attack was an attempt to assassinate me –Sunday Igboho

DSS attack was an attempt to assassinate me –Sunday Igboho 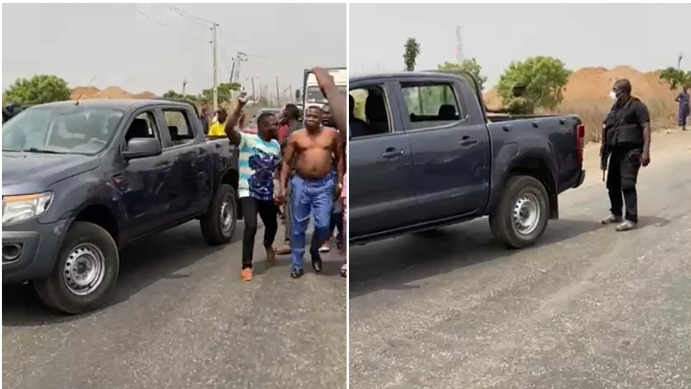 Popular Yoruba rights activist, Sunday Adeyemo, better known as Sunday Igboho, says the recent assault on his person by the operatives of the Department of State Services was an attempt to murder him.

The activist also said he pulled off his shirt because one of the DSS operatives rough-handled him and violently held onto his shirt around his neck area.

Igboho stated this on Saturday while featuring on a radio programme, ‘City Talks with Reuben Abati’.

In a viral video, a shirtless Igboho was seen with his men daring the security operatives and throwing expletives. Many have since wondered why the activist whom many believed to have metaphysical powers and known to wear traditional bulletproof vest was topless during the face-off.

But speaking during the radio programme, Igboho said, “Why I pulled off my cloth was that one of the DSS operatives violently held onto my shirt. So, I decided to pull off the cloth and give it to him for us to drag the matter.

“They started shooting when we began to drag the matter. The whole episode was an embarrassment for me. I am a responsible man, I am a Yoruba citizen, I am fighting for the rights of the Yoruba people. They don’t have to embarrass me.”

Continuing, the rights activist said, “I’m a businessman. I pay my tax to the Federal Government every month and I have evidence of tax payment. Should I be going on the road and some people attempt to kill me? For what? Why do that want to kill me because their plan on Friday was to assassinate me. Why?

“There is insecurity in the country. Fulani people are raping our people and killing our people in the forests but the security operatives are not going there to confront them. Instead, they are offered ransom. It is just sad that the government is threatening the common man living peacefully in the country. It should not be so.”

Igboho also said a joint team of DSS operatives, soldiers, and civil defence were on the Friday mission to arrest him, noting that there was no policeman on the team.

Though the DSS denied the attempted arrest but Yoruba socio-political group, Afenifere; Human rights lawyer, Femi Falana (SAN), amongst others have since condemned the DSS attempt.

Igboho rose to prominence last month when he issued an eviction notice to herdsmen accused of sundry crimes in the Ibarapa area of Oyo State and enforced same.

Presidential spokesman, Garba Shehu, had said the Inspector-General of Police, Mohammed Adamu, ordered the arrest of the rights activist but many Nigerians had condemned such move, insisting that the security agencies should instead summon popular Islamic scholar, Sheikh Ahmad Gumi, who has been seen hobnobbing with bandits in the forests of Zamfara and Niger States of late.