HomeNEWSEndSARS: Drama at Ogun State Panel of Inquiry as police sergeant prostrates and begs for mercy after threatening a member 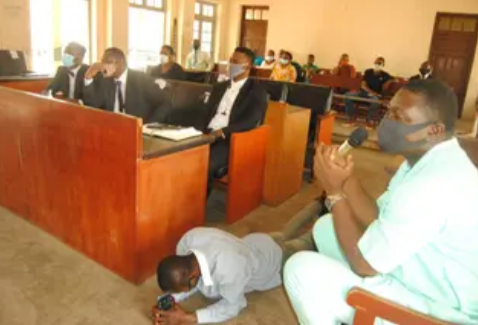 There was a mild drama during the sitting of the Ogun State Judicial Panel of Enquiry, when a police sergeant, Adeleke Olalekan prostrated and begged for mercy after he was caught threatening a member of the panel.

The police officer, in mufti, had accompanied a Chief Superintendent of Police (CSP), Gbenga Megbope, who was being cross-examined over a case before the panel.

It was gathered that Olalekan was caught pointing a finger at a member of the panel, in a manner suggestive of threat, during the sitting at Magistrate Court 1, Isabo, Abeokuta on Monday, January 18.

A member of the panel, who witnessed Olalekan’s reactions, quickly raised the alarm and the Chairman of the Panel, Justice Solomon Olugbemi (rtd) asked the Sergeant to come forward and explain the rationale behind his action.

A retired Deputy Inspector General of Police and a member of the panel, Peter Ogunyanwo, asked the Sergeant why he was disrespecting members of the panel.

The sergeant could not explain his action but instead prostrated before the panel members, and begged for mercy.

On his part, Megbope, who was the Commander of the defunct Special Anti-Robbery Squad (SARS) at Obada – Oko, also begged on the Sergeant’s behalf, saying “We are sorry sir.”

“Any person who commits an act of contempt, whether the act is or is not committed in the presence of the Commissioners sitting in Commission, such person or persons shall be liable to summary conviction before a court of competent jurisdiction to be convicted and punished according to the tenet stipulated in the law,” he added.

Justice Olugbemi noted that the Police Sergeant ought to be recommended for trial at the Magistrate court, but pardoned him following the pleading and apology.

He, however, warned that the panel would no longer tolerate any act of disrespect to it or any of its members.

Buhari swears in members of CCB, PSC, presides over FEC