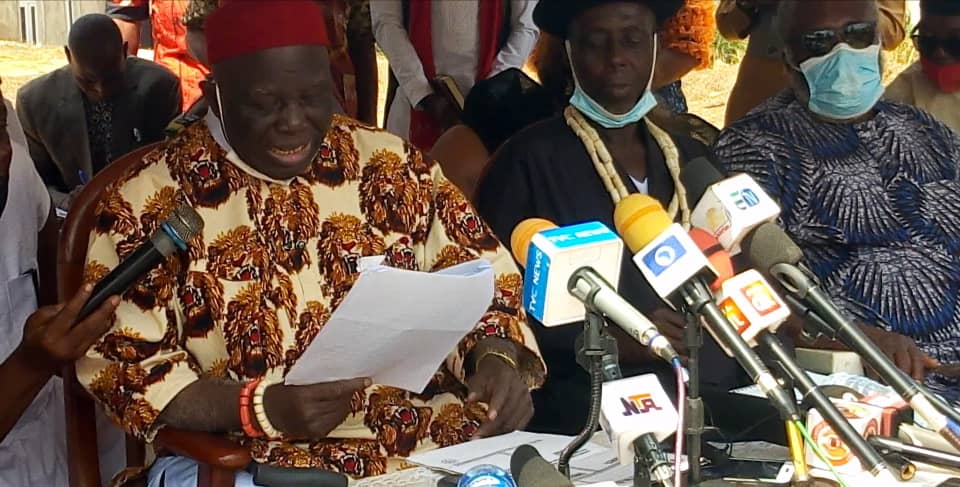 The newly elected and sworn-in President of Ohaneze Ndi Igbo, Professor George Obiozor has declared that the Igbo Nation has no reason to break away from Nigeria.

Prof. Obiozor stated this at his first official press briefing held in Enugu on Wednesday.

Prof. Obiozor who spoke on several national issues and conditions of the Igbo in Nigeria stated that Ndigbo have no reason to break away from Nigeria.

In his words, “the Igbo is not at war with Nigeria and has nothing pending before any institutional authority that demands a separate existence from Nigeria”

He also commented on the agitation by the Indigenous People of Biafra, IPOB, led by Nnamdi Kanu when he said “Nnamdi Kanu is one of us and he must listen to some of us for several reasons. The fact and reality are that the issues of Biafra are above his capacity to decide”.

“Nnamdi Kanu must listen because he is one of us and we are all in this dilemma together. And our mutual and collective responsibilities are sacred and must be respected. Consequently, all actions or utterances that put Ndigbo in” present and imminent danger” or “harm’s way” must be avoided”, he added.

“We must also understand that when Chukwuemeka Odumegwu Ojukwu said “the bones shall rise” he did not mean conflict, violence, and war. The bones have risen, reincarnated, or resurrected but in Ojukwu’s idea, the mission is creative and constructive. Ndigbo are builders and not nation wreckers or destroyers” he said.

Prof Obiozor stated that many things unite the Igbo nation but the emphasis is been given to the things that divide Ndigbo. He promised that his administration will help to invent a well-defined common cause and a common sense of direction.

He tasked Igbo people in the diaspora to join hands to bring about the accelerated development of Alaigbo.

“The goal of this administration is aggregating our successes into a common action that will lead to a collective success. Nothing unites a people more quickly that prospects for success and with a well-known Igbo spirit, this seemingly difficult task can be done,” he said

“Our position should therefore begin with efforts to effectively reintegrate Ndigbo into Nigeria’s political process. He added that it requires serious diplomacy and not confrontation or conflicts.

The new President-General of Ohaneze Ndigbo emphasized that to save Nigeria, the nation must implement restructuring, devolution of power, renegotiation, or decentralization of the country.