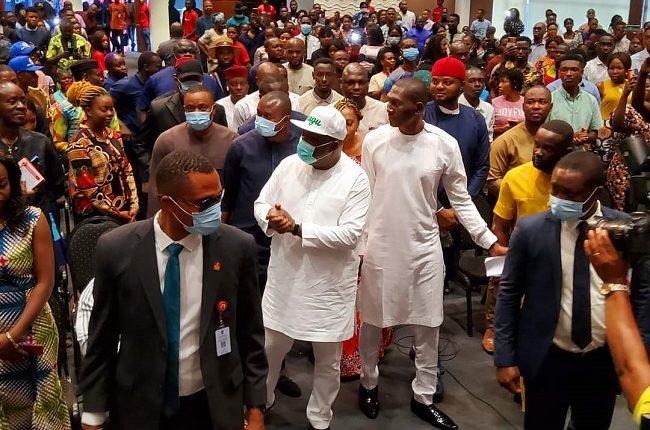 Political leaders, stakeholders and six traditional rulers from Eha-Alumona in Nsukka Local Government Area of Enugu State on Sunday  led the people of the community to the Government House Enugu to thank Governor Ifeanyi Ugwuanyi for the massive road projects his administration has executed in their area.
The Eha-Alumona people also thanked Ugwuanyi for the creation of two additional autonomous communities for them, Eha-Etiti and Ebor-Umabor Eha-Alumona, as well as the appointment of many of their sons and daughters into government positions.
They said that Eha-Alumona is one of the major beneficiaries of Ugwuanyi administration’s rural development policy, stressing that no past administration has done this in their land in terms of infrastructural development and empowerment of their people.
The people therefore, declared their unalloyed support for Ugwuanyi and his political aspirations in 2023.
Speaking, the six traditional rulers appreciated Ugwuanyi for the two autonomous communities his administration created as well as earthwork on the 16km erosion ravaged Eha-Ulo/Eha-Etiti/Eha-Ndiagu-Mbu road and 24km Premier Junction-Umabor-Mbu road, covering 40km, among other projects.
“No governor has done what you did in the land of Eha Alumona. We are solidly behind you.We pray for you and where you stand is where we stand in 2023,” they said.
Earlier, the leader of the delegation and member representing Nsukka East Constituency in the Enugu State House of Assembly, Rt. Hon. Chinedu Nwamba, informed Gov. Ugwuanyi that they came to wish him a Happy New Year and thank him for the two autonomous communities, numerous appointments of their sons and daughters, the road projects, and also to declare that “Eha-Alumona people are solidly behind you in any of your political aspirations in 2023”.
On his part, Prince Odo, the Chairman of ESIRS, said: “Just as I am in the finance sector, I know that there is no money to commit the level of resources that your administration committed to those two roads. We thank you. We are saying that wherever you are going to we are solidly behind you.”