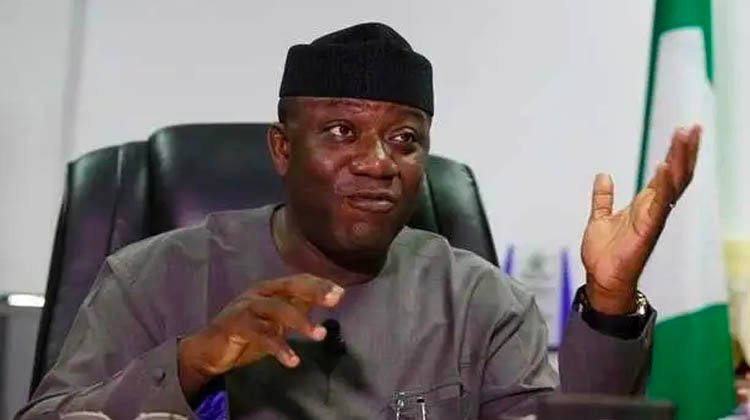 He said the fund, which he put at N3billion, was barely enough to pay salaries with almost nothing left to spend on infrastructure.

Fayemi spoke at an engagement programme with Ekiti federal civil servants and political office holders in Abuja on Thursday night.

The governor said because of the low revenue allocation, he has been relying on his ingenuity, network and support from development partners to bring development to the state.

He said, “When you really look at it, we are 34 on the revenue ladder of this country.

“What comes to us is roughly N3 billion and by the time we settle the wage bill in the state, we have merely zero left for infrastructural development.

“We need to rely on the network that we have and the creativity and innovation of ourselves, engagement of development partners who have significantly supported us in the state.

“However, over the last three years, we have brought investments worth over $300 million in Ekiti state. That’s just a segment of our economy.”

Fayemi expressed hope that his successor would be from his party in order to continue some of his projects.

“I hope I am able to do my third term through whoever that would be coming. That is the magic of Lagos,” he said.

Despite the paucity of fund, however, the governor promised to find a lasting solution to the Ado-Akure Road.

A report on Monday shows  how commuters and motorists were stranded due to the poor state of the road.

Fayemi said his administration had tried to ensure the road was fixed but was constrained.

He however added that the road would be fixed.

He said, “We have tried to do the Ado-Akure Road. I can reliably tell the house that we would ultimately sort that road out.

“It is one of the contradictions of being in a federation.

“You have your limit as a state and the Federal Government has its own too, it sometimes ends in these challenges.”