HomeNEWSFresh protest in Kastina over abduction of schoolboys

Fresh protest in Kastina over abduction of schoolboys 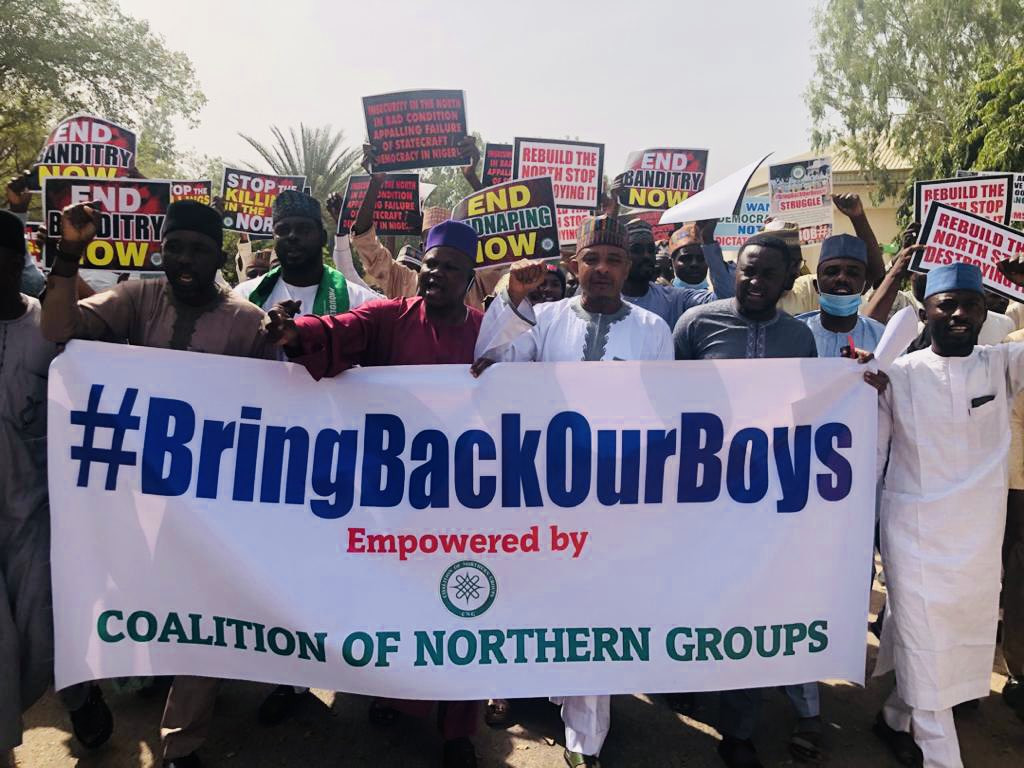 Youths under the aegis of the Coalition of Northern Groups on Thursday staged a peaceful protest in Katsina State over the abduction of students of Government Science secondary school, Kankara.

Members of the group carried placards with various inscriptions, among which are ‘Rebuild the North and not destroy it’; and ‘Nobody is safe in the North; End banditry now and Bring our boys’.

The group earlier addressed a press conference during which it lampooned the Federal Government over its failure to provide security for Nigerians as enshrined in the constitution.

The statement at the press conference was read by its National Coordinator, Balarabe Rufai.

It read in part, “Sensing a huge vacuum in the political will and capacity of government to challenge them, these criminal gangs have spread their activities and made life miserable for millions of people across states like Borno, Yobe, Zamfara, Kaduna, Katsina, Sokoto, Kebbi, Niger, Plateau, Adamawa, Benue and literally prohibited the use of major highways in northern Nigeria.

“The insecurity along the Northern highways is so high that people are afraid of travelling 50 miles from Funtua to Zaria; or the 80 kilometres from Zaria to Kaduna, not to talk of from Sokoto to Abuja or Kano.

“This frightening state of insecurity had in the last couple of weeks, escalated with the massacre of 43 rice framers and disappearance of 80 others in the hands insurgents in Zabarmari of Borno State.

“The situation deteriorated to the current unacceptable level with the abduction of hundreds of students of Government Science Secondary School, Kankara in Katsina State by armed gangs that rode in and out freely without any security presence.

“Besides the loss of citizens lives on a daily basis, this dangerous situation also comes with several other concomitant consequences that include a looming humanitarian crisis with reports indicating that by the end of 2019 alone, a total of 210,354 persons were displaced from 171 towns and villages in the North-West comprising 144,996 in Zamfara; 35,941 from Sokoto and 29,417 in Katsina.

“Against the backdrop of this heightened insecurity, especially the recent kidnap of over 300 hundred students in Katsina, the CNG has inadvertently arrived at the following observations: That President Buhari and his government are apparently helpless, incompetent, incapable or unwilling to act to rescue these 300 kids currently in captivity, exposed to harsh weather conditions, torture, hostile unfamiliar environment, malnutrition, the trauma of forced separation and threat of imminent death.

“That the audacity with which the over 300 school children were abducted right under the nose of the President who was a few kilometres away in Katsina at that time, confirms fears that government has completely lost the prerogative of providing security and therefore no longer reliable.

“That President Buhari has ultimately reneged on the pledge he made in Chatham House, London in 2015, to tackle insecurity head-on across the country, including paying special attention to the welfare of our soldiers in and out of service and giving the made quate and modern arms and ammunition to work with.

“That Instead, the security challenges in the country, particularly in the North which risks complete human, economic, and educational emasculation, have escalated beyond the former state of affairs before the coming of the Buhari administration in 2015. That powerful interests in government, pursuing pecuniary personal benefits, are not willing to see an end to these multiple and intersecting challenges that are making life difficult for a people. That these powerful interests have ultimately resorted to the indiscriminate deployment of bands of non-state actors against any legitimate attempt at expressing citizens concerns over the situation.”