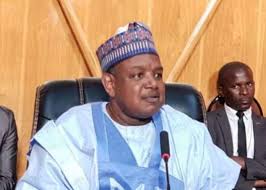 The appropriation bill was presented to the Kebbi State House of Assembly on the 25th November, 2020 which was passed by the lawmakers on 26th December, 2020.

While signing the budget at Government Government, Governor Bagudu commended the lawmakers for putting the general interest of the people of the state into their consideration by working assiduously to ensure prompt passage of the budget.

The budget had over N92.2 billion as capital expenditure while N49.5 billion was for recurrent expenditure, representing 65 per cent and 35 per cent respectively.

While signing the budget in Birnin Kebbi, Bagudu, said that the budget,which had been graciously approved and passed by the state house of assembly was N141.6 billion.

Bagudu, who prayed that the 2021 budget performance would be better than the 2020,said the 2020 year was tough year globally because of coronavirus pandemic.

“But locally is also tough for us because of other local factors, particularly the flood disasters that affected the state,” he added.

He also lamented the inability of the state to collect internally generated revenue as challenging one, stressing that the noble executive could not deliver all the priorities that the people expected with insufficient resources.

“Our ability to collect the revenue has been weak, and no matter the nobility of the executives, the government units cannot deliver all the priorities that the people expect.

“I am glad President Muhammadu Buhari has led us very well, and we have been able to deliver a lot of the promises but obviously there is need for more resources to support the bigger dreams and opportunities,” he said.

He said the state had recovered from the flood, and had procured fertilizer to be distributed to farmers who had been affected by the flood disasters first week of January, 2021.

” The experience of the floods have shown us that we need to invest in the upland rice production, and we need to start early because upland production starts in the dry season. And to do it, we have to secure seedlings and ensure that the seedlings are distributed much earlier before the start of the rainy season,” he said.

The governor also commended the house of assembly for the speedy passage of the budget and for being veritable pillar of support to the state government in order to deliver on the people’s mandate.

Earlier,the Speaker of the state house of assembly, Alhaji Samaila Abdulmumuni Kamba commended the governor for his commitment towards developing the state.

“We had worked tirelessly; day and night, in order to meet up the promise we made on speedy passage of the budget, and it was passed on December 26 as we are delighted to present it for your assent into law.

” We pray God Almighty to bless your efforts and efforts of the assembly for our dear state to move forward,” Kamba prayed.

Leave Oshiomhole out of your predicament, Edo APC replies Shaibu