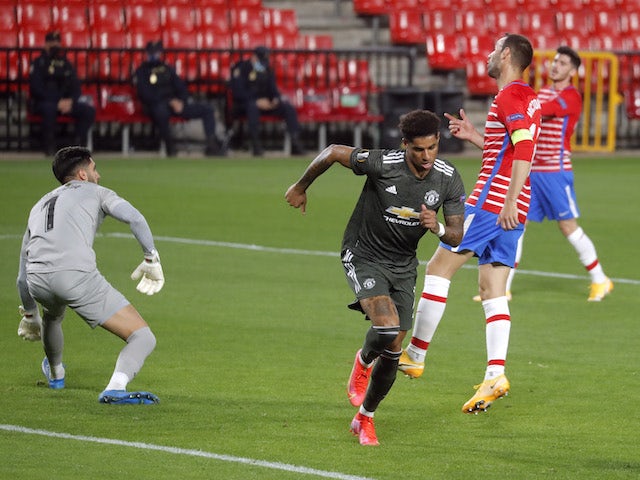 MIGHTY Marcus Rashford pushed through the pain barrier to open the door to another semi-final for Manchester United.

Patched up to play, he looked like he needed to go off as he held his leg and grimaced through the first 20 minutes.

The Granada players could tell he was struggling, which is why they kept leaving a foot in and nipping away at the England international.

But Rashford is made of tough stuff and if they thought he was going lame they were wrong.

In the 31st minute he produced the sort of gallop that so impressed Sir Alex Ferguson at Aintree as he completed a hat-trick of wins.

Victor Lindelof spotted him bursting out the gates between full-back and centre-back and delivered a superb pass from deep inside his own half.

Tom Brady, who lead the Glazers’ Tampa Bay Buccaneers to Super Bowl victory, could not have picked out a team-mate better.

Rashford looked over his shoulder as he continued his run then with a superb first touch brought the ball under his spell.

With the second he knocked it forward and then the third saw him slide the ball past the advancing goalkeeper to win this Europa League quarter-final first leg.

Bruno Fernandes gave the scoreline a more justified look to reflect United’s dominance when he a converted a 90th minute penalty he had won after being knocked over in the box by Yan Brice’s flailing arm.

Rashford now has 20 and so became the first United player since Wayne Rooney a decade ago to score 20-plus goals in back to back seasons after hitting 22 last season.

To think he is doing it while carrying a shoulder problem that will need surgery after the Euros this summer.

Last season a back injury kept him out of action for 141 days.

An ankle problem meant he had to pulled out the most recent England squad.

And then he limped out of United’s 2-1 win over Brighton in the 72nd minute on Sunday having grabbed the equaliser ten minutes earlier.

Solskjaer doubted he could play 90 minutes last night but started him and he delivered so he could come off after 66.

The 23-year-old is crucial to United a scorer of great goals as we saw in Europe this season with his winner in the Champions League Group against PSG.

He also got a hat-trick against RB Leipzig in a 5-0 home win that should have propelled them to qualify for the next stage of that competition.

He has eight now across the two competitions.

That will mean little to Rashford, however, unless United go on to lift this trophy.

He has winners medals from the 2016 FA Cup and 2017 EFL Cup and when they lifted the Europa League against Ajax in Stockholm.

That was United’s last trophy though and the Ole Solskjaer era needs one.

Ajax once more or AS Roma will wait for them in the last four if, as they should, they get the job done in the second-leg next week.

It will be their fifth semi-final over two seasons and they have lost the other four, twice to City in the EFL, to Chelsea in the FA Cup and Sevilla in this competition.

Solskjaer said trophies are for egos and the real measure of this team’s progression will be if they finish second in the league after a third place last season.

But I can’t remember the last time United fans were dancing in the streets at finishing second.

They were certainly dancing in Stockholm when they won this under Jose Mourinho and would love a trip to Gdansk for the final of this.

How many could witness that final of course is debatable due to Covid.

Mind you on the evidence of the Europa League last season when United played a mine tournament behind closed doors in Cologne, their supporters will travel just to be in the same City as their heroes.

And Rashford is a hero on the pitch and off it for his amazing work in fighting child poverty.

Solskjaer warned that Granada’s fight and spirt could be a problem last night.

Assembled at eight millions euros, that is less than David De Gea earns in a fortnight.

Recalled to the side last night he didn’t have to do a lot to pocket his wages for the week.

Next up it is Spurs away on Sunday and their old boss Mourinho, the last United manager to lift a trophy.

Rashford will pick himself up this morning, dust himself off and the physios will go to work to get him to the Tottenham Hotspur Stadium.

They need him, as last night in Andalusia once again proved.

‘This Is Not Goodbye’: Mikel Obi Retires From Football