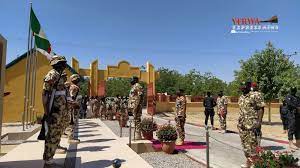 The Nigerian Army has taken 60 newly acquired Tracked Armoured Personnel Carriers, APC, manufactured in China by NORINCO to be deployed to theatre of operations.

The Chief of Army Staff, Faruk Yahaya, inuagurated the 60 APC at the Nigerian Army School of Infantry, Jaji, Kaduna on Thursday.

“These platforms commission here today is in addition to other equipment brought in for this purpose and underscores the strategic resolve to ensure that a state of normalcy is achieved across the country.

“Let me make it very clear that Nigerian Army, under my watch  shall continue to working assiduously with relevant stakeholders, partners and other agencies in the protection of the sovereignty of Nigeria,” Mr Yahaya said.

He assured Nigerians that the army would continue to take firm steps in curtailing activities of non-state actors and ensure that they are rooted out completely, neutralised and annihilated.

He warned that any attempt to scuttle ongoing efforts of government by troops would be severely dealt with.

Earlier, Commandant, Nigerian Army School of Infantry, Maude Gadzama, expressed optimism that the receipt of the platforms would aid the infantry in clearing objective without stress.

He assured the army chief that troops had been trained effectively on the equipment and the purpose for which they were purchased would be achieved.

He warned the insurgents to either tow the path of peace and surrender with their arms as done by thousands of cohorts.

The commandant urged troops to employ the armoured personnel carriers effectively and use them as the last broom to sweep the feet of insurgents out of Nigeria.

He also urged them to make judicious use of the equipment through routine check and maintenance.

The 60 Armoured Personnel Carriers were handed over to the Nigerian Army for theatre of operations in an event that highlighted test-driving of the equipment by troops.

Anambra Guber: Abaribe Canvasses Support For Ozigbo, Says He Will Be Leading Voice For Igbo