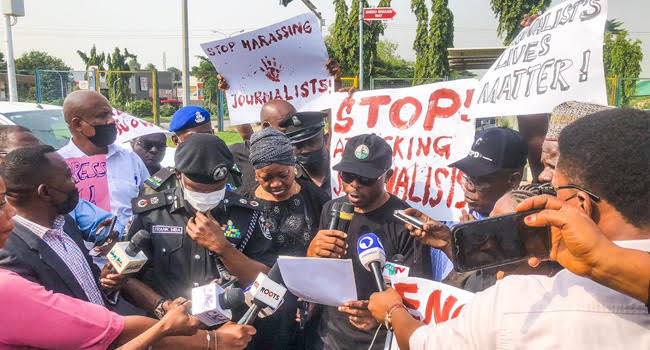 The Nigerian Union of Journalists (NUJ), yesterday stormed the Police Force Headquarters in Abuja to protest the disappearance of one of their colleagues, Tordue Salem, of the Vanguard Newspapers.

Salem, a Tiv, from Benue State, covered the House of Representatives until his disappearance on October 13.

The NUJ chairman in Abuja had earlier raised the alarm over his sudden disappearance and reported the matter to the police and the Department of State Services (DSS), to find Salem.

However, twelve days after his disappearance, the NUJ members led by the Chairman, Emmanuel Ogbeche, stormed the Louis Edet house to protest the continuous disappearance of their colleague.

Ogbeche, while addressing the police said “For all us journalists in Abuja, we have been on edge these past few days over the mysterious disappearance of our colleague and friend, Mr. Tordue Salem,” the statement signed by the union’s CZzzhairman, Emmanuel Ogbeche and Secretary, Ochiaka Ugwu, said.

“It is worrying that an adult will simply vanish into thin air without a trace. This is unacceptable and we urge the police and DSS to rise up to the occasion and provide answers to this troubling situation”.

Woman Dies as Trailer Crashes into her Car