HomeNEWSChina Locks Down City Of Four Million Over COVID-19 Cases 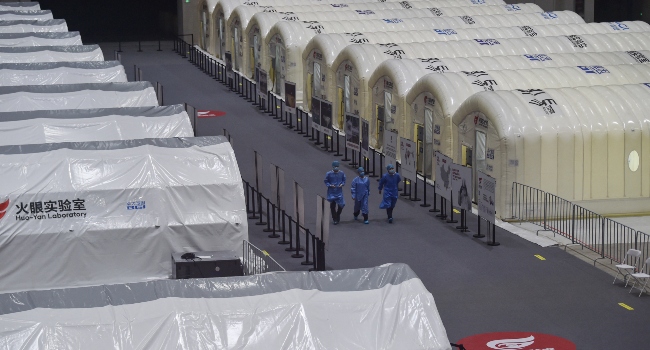 China placed a city of four million under lockdown on Tuesday in a bid to stamp out a domestic coronavirus spike, with residents told not to leave home except in emergencies.

Beijing imposed strict border controls after the new coronavirus was first detected in China in late 2019, slowing the number of cases to a trickle and allowing the economy to bounce back.

But as the rest of the world opens up and tries to find ways to live with the virus, China has maintained a zero-Covid approach that has seen harsh local lockdowns imposed over just a handful of cases.

Residents of Lanzhou will be required to stay at home, authorities said in a statement.

Officials added the “entry and exit of residents” would be strictly controlled and limited to essential supplies or medical treatment.

Bus and taxi services had already been suspended in the city, and state media said Tuesday that Lanzhou station had suspended more than 70 trains, including key routes to major cities like Beijing and Xi’an.

Flights to Lanzhou were also being cancelled, with a Southern Airlines representative telling AFP that all their flights from Beijing’s Daxing airport to Lanzhou were cancelled due to public safety, without any date given to resume.

Health officials have warned that more infections may emerge as testing is ramped up in the coming days to fight the outbreak, which has been linked to a group of domestic tourists who travelled from Shanghai to several other provinces.

Strict stay-at-home orders have already been imposed on tens of thousands of people in northern China.

In Beijing — which reported three new cases Tuesday — access to tourist sites has been limited and residents advised not to leave the city unless necessary.

Some 23,000 residents in one housing compound in Changping district have been ordered to stay indoors after nine cases were found there in recent days, local outlet Beijing News reported.

Community mahjong and chess rooms have been closed, and residents have been told to reduce large gatherings where possible.

Organisers on Sunday indefinitely postponed a marathon at which 30,000 runners were expected.

Mass testing is underway in 11 provinces and authorities have suspended many inter-provincial tour groups.

While the country’s case numbers are extremely low compared with elsewhere in the world, authorities are determined to stamp out the latest outbreak with the Winter Olympics just over 100 days away.

Those deemed to have failed in controlling Covid are often dismissed from their posts or punished.

On Tuesday, the official Xinhua news agency reported that the party secretary of Ejin Banner in the northern Inner Mongolia region had been sacked, “due to poor performance and implementation in epidemic prevention and control”.

The city has also been hit by the latest wave which has mostly spread in northern areas in China.

Six other officials were punished for their “slack response” to the latest flare-up, state media reported, and a local police bureau deputy director was removed from the position.