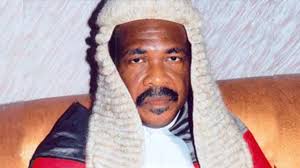 He passed away on late Monday after a brief illness.

Justice Ighodalo was the number three in the hierarchy of 31 judges in the state.

It was reported that his demise stalled all cases in the courts, as other judges, magistrates and presidents adjourned.

“He was a renowned judge with an unflinching determination to always impact knowledge on one and all.

‘’We will greatly miss him. He was a jurist of no mean repute,” his statement read.