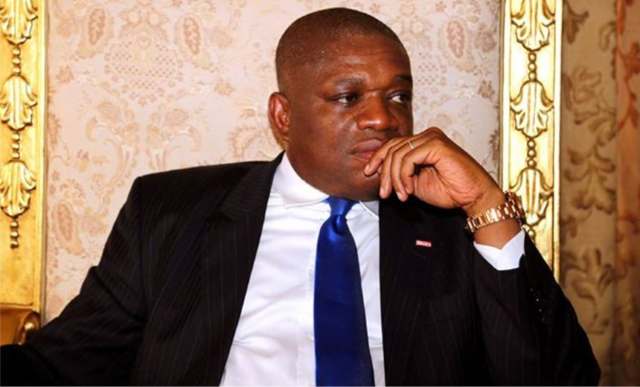 Former governor of Abia State and Chief Whip of the Senate, Dr. Orji Uzor Kalu has called on Africans in the diaspora to contribute to the growth and progress of the African continent by participating in the political process in their respective countries.

The former governor stressed that Africa has untapped potential, adding that with the sustenance of democratic virtues the future of Africa was bright.

Kalu, who spoke during a breakfast meeting with a cross-section of students of War College, Washington D.C, who are of Africa origin, at his Potomac residence, yesterday, before departing for Nigeria, charged political and business leaders on mentoring the younger generation in business, politics and governance.

The Chief Whip of the Senate faulted peddlers of negative news on Africa adding that Africans are successful in various professions across the globe.

He said: “As a business and political leader, I have over the years, built robust cross-national and multi-sector experience. During my stint as Governor of Abia State in South-East Nigeria, coming from the private sector, I was determined to improve the common lots of the people. I inherited a huge debt profile from previous administrations in the state. We also met deplorable infrastructure across the state.

“I was prepared for leadership before venturing into politics.  To be a good leader, you must demonstrate intellectual capacity, business acumen and strong will to achieve positive results. In Africa, we have talents in all facets of life, but without mentorship, the skills of the people cannot be properly harnessed. Government at all levels must support human capital development in a bid to drive sustainable growth and development.

“The United States of America, United Kingdom, Canada and other developed countries gave me support during my reign as governor. Through their representatives in Nigeria, I consistently engaged them and they provided through various agencies, support for human capital development and poverty eradication.

“Although these aids and support are attainable, if as a Governor, you demonstrate the capacity to drive development in your state, by adhering to tenets of democracy anchored on probity, transparency and accountability. I strengthened data collection in Abia state and as such, we developed the state by embracing a bottom-up approach of governance based on baseline survey and impact assessment report.”

Kalu emphasised that Nigeria was better off as a united and indivisible entity, noting that political leaders must understand the micro and macro-economies of their jurisdiction for them to add positive value to the economy.

“In view of the dwindling allocation to states in Nigeria from the Federal Government, governors must look inward in a bid to improve their revenue base. States must support businesses by providing enabling business environment and ultimately they will also receive higher taxes. The are arable lands owned by government at all levels which can be used for mechanised farming to provide food and employment opportunities for the people. Existing business ventures owned by government should be strengthened by working closely with business leaders to raise huge revenue and profit. For success to be achieved at all levels of government, the people at helm of affairs must have the political will and administrative acumen to implement good policies that will translate into greater good for the people.”

The former governor applauded the Nigerian armed forces for their combined efforts in the fight against terrorism, kidnapping and banditry,  stressing that they have made invaluable contributions to nation-building through intelligence and surveillance.

“The Nigerian armed forces are one of the best in the African continent. They have achieved a remarkable milestone in fighting bandits, kidnappers, terrorists and other criminal elements in the society. Nigerians must celebrate the brave men and women of the military, who have continually fought for the unity of the country.

“We must collectively join hands with government in complementing the patriotic efforts of the military in curbing insecurity across Nigeria.”