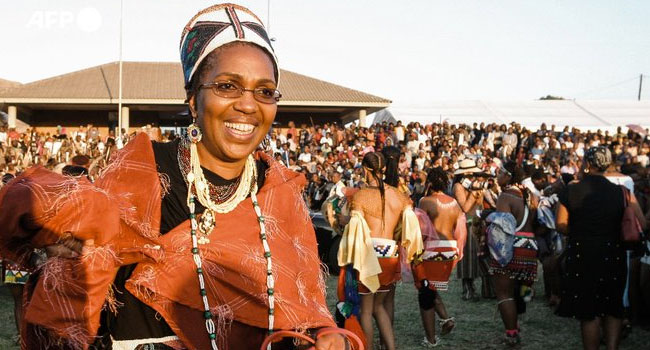 “It is with the deepest shock and distress that the Royal Family announces the unexpected passing of Her Majesty Queen Shiyiwe Mantfombi Dlamini Zulu, Regent of the Zulu Nation,” Mangosuthu Buthelezi, traditional prime minister to the Zulu monarch, said in a statement.

“This has taken us by surprise and left us utterly bereft,” he added without mentioning the cause of death.

The sudden death of Dlamini-Zulu, 65, comes days after she was reportedly hospitalised just weeks after her husband’s burial.

Zwelithini passed away on March 12, aged 72 after half a century on the throne, following a battle with diabetes-related illness.

Although the title of Zulu King does not bestow executive power, the charismatic Zwelithini had moral influence over more than 11 million Zulus, nearly a fifth of South Africa’s population.

As the most influential of traditional leaders, he advised legislators and met with powerful politicians throughout his rule.

He left behind six wives, 28 children and a thorny question on succession.

Although she was Zwelithini’s third wife, Dlamini-Zulu held the title of “great queen” — a status determined by her dowry.

Dlamini-Zulu was the sister of Eswatini’s King Mswati III.

She was elected regent while the royal family was in a three-month mourning period before the next monarch was named.

Some speculated that her eldest son, Prince Misuzulu Zulu, 46 — whose name can be loosely translated as “strengthening the Zulus” — could be heir to the throne.

Buthelezi on Thursday assured that while the royal household was grief-stricken, “there will be no leadership vacuum in the Zulu nation.”

President Cyril Ramaphosa overnight expressed deep condolences to the royal house saying South Africa was standing by the family “in this hour of compounded grief.”

“We extend our thoughts, prayers and hearts once more to the Royal Family who, in the midst of mourning the passing of the beloved King, are now called upon to bid farewell to the Regent in sadly short succession.”