HomeNEWSMedical doctor, 17 others in EFCC net over Internet fraud

Medical doctor, 17 others in EFCC net over Internet fraud 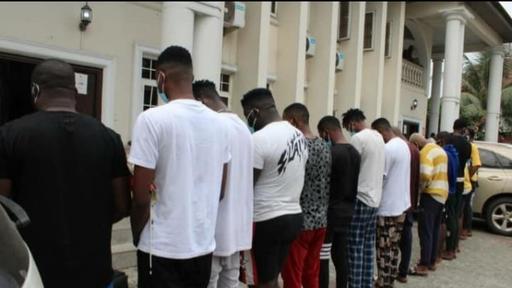 The Uyo Zonal Office of the Economic and Financial Crimes Commission on Wednesday arrested a 28-year-old medical doctor, Chijioke Precious, and 17 others over alleged Internet fraud in Owerri, the Imo State capital.

The agency said the suspects were arrested around 1 am on Wednesday in the Umuguma area of World Bank, Owerri, Imo State.

The EFCC said it recovered from the suspect’s luxurious cars, including one green Lexus ES 350, one blue Lexus ES 320, two Toyota Venza, one silver Lexus RX 350, one black Toyota vehicle and one white Mercedes Benz 4Matic.

Other items recovered are over 20 sophisticated mobile phones, 12 laptops, four inverter batteries, one television and jewellery suspected to be proceeds of crime.

Williams breaks down in tears after Australian Open semi-final defeat