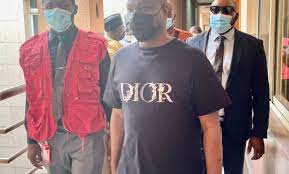 Mompha,  who was rearrested on Monday, was arraigned alongside his company, Ismalob Global Investment Ltd, on a fresh eight count fraud charge.

Mompha, an Instagram celebrity is currently faces trial at the Federal High Court Lagos on 22-count fraud charges against him by the EFCC, the social media celebrity has however pleaded not guilty to charges of conspiracy to launder funds obtained through unlawful activity, laundering of funds obtained through unlawful activity, and retention of proceeds of criminal conduct.

Other charges include using property derived from unlawful acts, possession of documents containing false pretence, and failure to disclose assets and properties.

The lead EFCC prosecutor, Rotimi Oyedepo, requested a trial date following the arraignment, as the defence counsel, Gboyega Oyewole, however  informed the court that he had filed a bail application that had been served on the prosecution.

According to the EFCC, Mompha committed the alleged offence between 2016 and 2019 in Lagos.

The defendant is alleged to have conspired alongside Ahmadu Mohammed, now at large, to conduct N5.9 billion worth of financial transactions to commit the offence of obtaining by false pretence.

The prosecutor alleges that the defendant also conducted other illegal transactions.

The EFCC also alleged that on October 20, 2019, Mompha failed to furnish information concerning his interest in expensive watches such as a Rolex, a Hublot, two Piguet wristwatches, an iPhone 8 worth N70 million.

“This according to the prosecutor, is required on page 10 of the Declaration of Assets Forms and is, therefore, an offence,” the prosecutor said.

The alleged offences violate sections 5(1) 6, 7 of the Advance Fee Fraud and Other Fraud Related Offences Act 2006 and Sections 7, 18 and 27(3) of the EFCC Establishment Act 2004, as Justice Mojisola Dada adjourned the case until January 18 for a bail application hearing.

How I was able to combine medical school, acting -Jemima Osunde