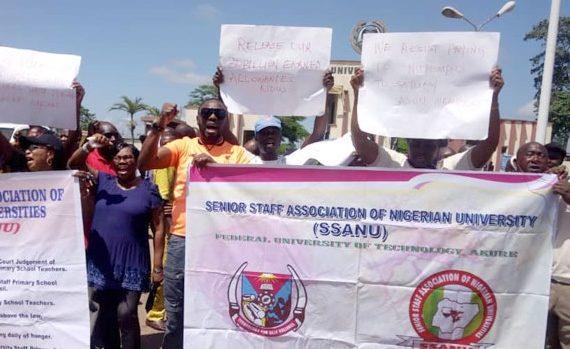 The joint action committee (JAC) of the non-teaching staff unions of universities has given the federal government a two-week ultimatum to reverse its sharing formula for paying allowances.

The JAC covers the Non-Academic Staff Unions of Education and Associated Institutions (NASU), the Senior Staff Association of Nigerian Universities (SSANU), and the National Association of Academic Technologists (NAAT).

The federal government had earlier released N40 billion for the payment of earned allowances of the four university-based unions where ASUU was also allocated 75 per cent and 25 to the other three unions.

The government also recently assured the payment of N22.127 billion as earned allowances for the university staff with the sharing formula.

According to Report, Peters Adeyemi, NASU general secretary, and Mohammed Ibrahim, SSANU president, were signatories to a letter issued by the JAC of the aforenamed unions on Wednesday, in Abuja.

The letter was addressed to Chris Ngige, the minister of labour and employment, and titled, “Refusal of federal government to honour memorandum of action”.

“The leadership of the JAC of NASU and SSANU is constrained to write the minister in respect of the total failure of the federal government to positively address all the issues contained in the MOA signed on February 25,” he said.

“The refusal of the Minister of Labour and Employment to finalise action on the subsequent Memorandum of Action reached at the meeting of Aug. 25

He said, contrary to the content of its February 25 MOA and the decision reached at the subsequent meeting of August 26, the government has agreed to release another tranche of N22.127 billion for earned allowance to the universities and inter-university center staff at the ratio 75-25 percent.