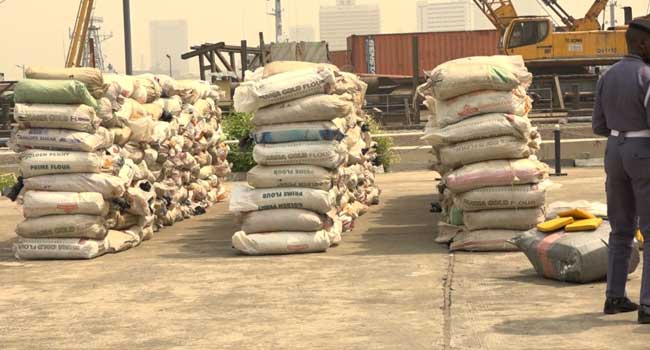 The Nigerian Navy on Thursday paraded some suspected smugglers of foreign rice and seized cocaine and other items valued at N100 million.

Rear Admiral Bashir Mohammed, the Commander of the NNS Beecroft Lagos, disclosed this while parading the suspects.

He said the suspects were involved in illicit drug traffickers, foreign rice smugglers and oil bunkering to the detriment of the nation’s economy.

“We arrested some suspected criminals involved in a different kind of crime. This includes illegal bunkering of petroleum products, movement of cannabis popularly known as Indian hemp and also smuggling of rice,” he said.

The suspected oil bunkers, the naval commander stated, were arrested with 125,250 litres of the Petroleum Motor Spirit, otherwise known as petrol.

Real Admiral Mohammed warned that the petroleum products estimated to take about three tankers could be dangerous to car engines.

“You have a large quantity of foreign rice smuggled into Nigeria using boats. We have over 400 bags. We are very serious about the rice issue because of the Federal Government economic policy of non-importation of rice and we are to produce our own rice. So these are economic saboteurs,” he added.

“One of the most disturbing aspects of it is that most of them are foreigners from our neighbouring countries who come in to this country and be involved in this heinous crime.”

He promised to hand over the goods and suspects to the relevant agencies – the National Drug Law Enforcement Agency, the Nigeria Security and Civil Defence Corps and the Nigeria Customs Service for prosecution.

This is even as he warned that the Nigerian “Navy Beecroft will not tolerate any act of crime in our water. Anyone involved will be brought to book.”

All the suspects paraded are said to be arrested during the yuletide.