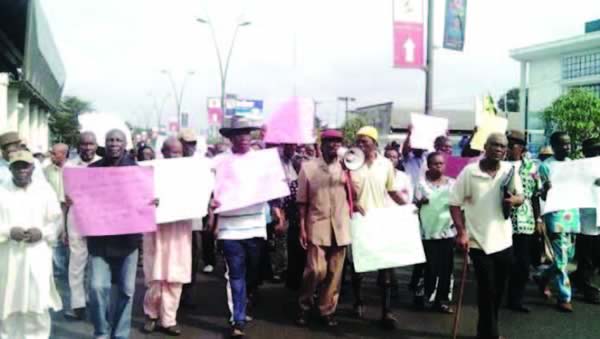 As many Nigerians and citizens across the world are celebrating the festive period, although in lockdowns due to the COVID-19 pandemic, pensioners in some states across the country are lamenting that they had not been paid their pensions and/or gratuities by various state governments.

Some of the state chapters of the pensioners’ unions said this development had caused them to celebrate the festivities in suffering, with some regretting that they had been abandoned after serving the government for many years.

Based on this development, pensioners in Edo State said they would resume their protest in January to draw more attention to their plight.

The issue of non-payment of retirees’ pensions and gratuities has lingered for years in many states across the country, despite endless protests and pleas by the pensioners for the government to pay their dues.

In an interview, the Chairman, Nigeria Union of Pensioners in Ekiti State, Mr. Ayo Kumapayi, said many retirees in the state were unhappy they had not been paid during this holiday period.

“We don’t feel happy about it because I expect that some people would want to use the meager pensions to offset so many expenses during these holidays. Unfortunately, state pensioners have not been paid,” he said.

Also, the Secretary, NUP, Osun State chapter, Mr Dele Aina, said although the state government had been paying their monthly pensions regularly, some retirees were being owed 30 months of modulated pensions, equivalent to 15 months of full pensions.

The Plateau State Secretary of the NUP, Bulus Ibrahim, on Saturday said he hoped something could be done to alleviate their suffering.

Also, the Cross River State NUP chairman, Okonsin Bassey, decried that pensioners were suffering because they had not been paid their gratuities, saying this would affect their celebration during the festive period.

“No one would like to enter the New Year without being paid their benefits. Some of the benefits have not been paid for over 10 years,” he said.

However, Bassey said the state government “is regularly paying their pensions.”

Also, the Kwara State NUP Chairman, Alhaji Oladimeji Saidu, said pensioners in the state were being owed 11 months of pension arrears, and it had affected their celebration of the festive period.

The Rivers State NUP Chairman, Collins Nwankwo, also decried that pensioners were suffering during the festive period, saying the state government had failed to pay them their gratuities and other accrued entitlements since 2015.

The Enugu State NUP Chairman, Mr Damion Udeani, also said they were suffering during the festive period due to the non-payment of their entitlements.

In Anambra State, the NUP chairman, Anthony Ugozor, said although their pensions were being paid, they needed their gratuities to make their joy full.

A NUP official in Bayelsa State who spoke on condition of anonymity said they were unable to celebrate Christmas and had no means of celebrating the New Year due to the non-payment of their benefits.

The Zamfara State NUP Chairman, Hassan Mohammed, said although the state government had been regular in the payment of pension, enough was not done to pay gratuities.

“Now that the New Year is fast approaching, many of us have nothing to eat,” Mohammed said.

Also, the NUP Secretary, Ogun State chapter, Bola Lawal, said the non-payment of their gratuities would affect their celebration of the New Year.

Meanwhile, in Oyo State, the pensioners said the government owed them over N30bn arrears.

However, they said the current administration had demonstrated commitment to their welfare by gradually offsetting the backlog while also paying the monthly pension.

The state NUP Secretary, Mr Olusegun Abatan, said the pensioners in the state would be going into the New Year with “great relief as we now get our entitlements at the same time the state workers receive their salaries.”

Meanwhile, pensioners in Edo State have vowed to resume protests in January to demand their rights from the government.

The spokesperson for the state NUP, Gabriel Osenwenkha, said, “We are planning to resume our protests between January 1 and 15 because the situation has not changed. The governor (Godwin Obaseki) is someone we all respect, but he has somehow disappointed (us), and that is why we are prepared for war.

In the meantime, the Akwa Ibom and Benue state governments have set up committees on the payment of pension arrears.

The Akwa Ibom State government set up a 16-member committee to address the issue of pension and gratuity arrears in the state. The state NUP spokesperson, Apostle Ime Udo, told one of our correspondents in Uyo, the state capital, that the committee was working out the modalities for the payment of the backlog of pensions and gratuities.

Also, Benue State Governor, Samuel Ortom, at different fora had said that his administration was taking steps to provide immediate, short-term, and long-term solutions to the pension problem through the establishment of the Benue State Pension Commission, modeled after the Federal Government’s National Pension Commission.