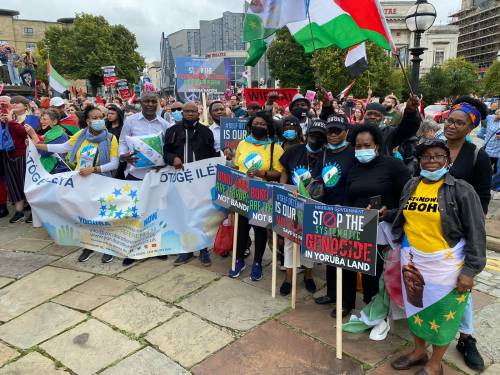 The  Yoruba Nation protesters, again stormed the Nigerian Consulate in New York, Tuesday and yesterday demanding a separate state for the Yoruba, who they claimed were no longer safe in Nigeria.

They reminded President Muhammadu Buhari of his 2015 United Nations General Assembly speech, where he called for self-determination in favour of the Western Sahara people and the Palestinians.

Displaying posters of Yoruba people allegedly killed by Fulani herdsmen, they blamed the Buhari’s administration for giving the attackers the confidence to carry out their dastardly act and doing nothing to stop them.

One of the leaders of the protesters, who gave her name as Yoruba Wuyi, claimed that they embarked on the protest in Manhattan, New York, on Tuesday because their people including students were being allegedly slaughtered.  Another leader of the Yoruba nation, Foluso Aruleba, recalled that in the 2015 United Nations General Assembly, Buhari called for self-determination in favour of Western Sahara people and the Palestinians, saying it was now the turn of the Yoruba to be set free and allowed to have their own country.

Aruleba said: “We too need our self-determination now, we need our referendum now. There is nothing new under the sun, it happened in Germany in 1933 from where they withdrew from the League of Nations, USSR in 1991, Southern Sudan in 2011. I and my family want to return home but we cannot under this circumstance. The people that protested in favour of this government were spending hundreds of dollars here, those of us living in this country cannot spend money like that because we work hard for our money. What we currently have is an unequal yoke, we have to go our separate ways.”

However, a section of the large Diaspora population, whose remittances of monies running into billions of American dollars have lifted Nigeria’s economy has continued to show its political clout by mobilising support for the motherland with independent campaigns and rallies on New York streets.

Several demonstrators chanting slogans in favour of the continued existence of Nigeria as an indivisible entity have been greeting passers-by with banners proclaiming: “One Nigeria,  One Destiny,” “We Want Unity not Secession,” among others.

The goal of the group named “United Nigeria Group” is to sensitise the global gathering of the developments in the country and to show their support to President Muhammadu Buhari in his “efforts to resolve the challenges facing the nation.”

Meanwhile, the Nigerian Indigenous Nationalities Alliance for Self-Determination (NINAS), and the apex Yoruba self-determination group, Ilana Omo Oodua (IOO), under the leadership Prof Banji Akintoye, have dissociated themselves from a three-day Yoruba nation rally slated for Washington DC in the United States of America from October 1-3, 2021. This followed a video clip that has gone viral on social media, creating awareness for the rally. The promotion video clip purportedly emanated from a group called ‘Yoruba Nation in conjunction with its associates, including the Independent People of Biafra (IPOB).

Coordinating Secretary of NINAS, Tony Nnadi, and Vice-Chairman, Ilana Omo Oodua, Otunba Shade Olukoya, in a statement made available to Daily Sun on Wednesday, stated that the emblems of NINAS and that of IOO were “displayed very conspicuously in a manner that creates the false Impression that NINAS and its associated platform, Ilana Omo Oodua, are somehow involved in the planned Washington DC rally of October 1-3, 2021.