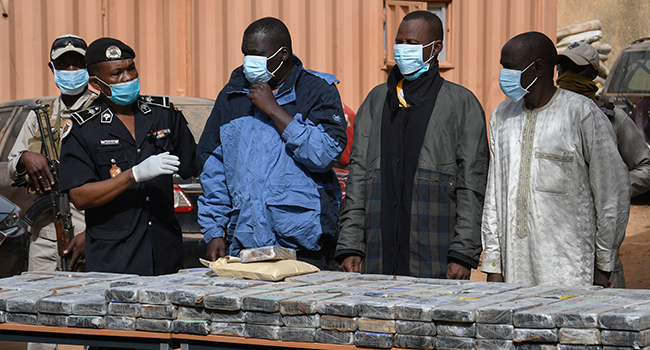 Police in Niger said Wednesday they had seized a record 214 kilograms (471 pounds) of cocaine in the country’s northern desert and arrested a local mayor and his driver as they allegedly tried to drive to Libya with the haul.

The drug, as well as the two suspects and their vehicle, were brought before the press in Niamey by the Sahel nation’s drug agency OCRTIS after the operation on Sunday.

Police following the trail of a quantity of drugs smuggled in from Mali found 214.6 kilos of cocaine in a municipal car from Fachi, whose mayor was also aboard, OCRTIS spokeswoman Nana Aichatou Ousmane Bako said.

The car was heading to Dirkou, which lies close to the border with Libya, she said.

“It’s the first time that our country has seized such a big quantity of cocaine,” she said, adding that the drugs’ final destination was Europe, where it had an estimated street value of more than $19 million (nearly 17 million euros).

Fachi is an oasis in the heart of the Tenere desert, located more than 1,600 kilometres (1,000 miles) from the capital Niamey and 450 kms from Agadez, the biggest town in Niger’s remote desert north.

The main industries in Fachi are trading in salt and dates.

Drug seizures have become frequent in Niger’s north, which has gained a reputation for multiple types of trafficking, including gun-running and migrant smuggling.