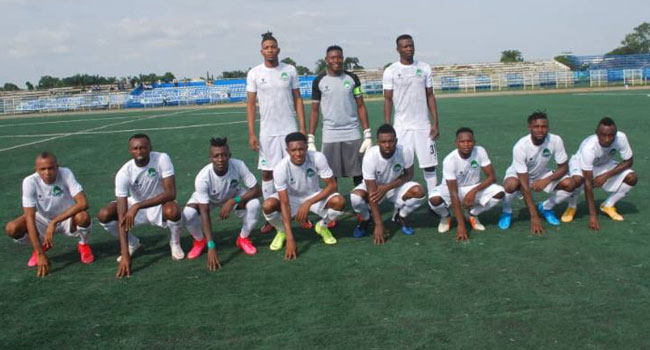 Nasarawa United have continued their fine goal-scoring run in the Nigeria Professional Football League with a 2-0 victory over Plateau United on matchday 27 in Lafia.

The Solid Miners have scored 37 goals this season, the highest recorded by a team this season. Today in Lafia they made it back-to-back league wins, consolidating on the 3-1 win they achieved over Warri Wolves.

The game against Plateau United was tight at the start and failed to produce goals at half-time. In the second half, coach Bala Nikyu’s team turned up and heat and took the lead in the 51st minute through Chinedu Ohanachom’s goal. It was Ohanachom’s fifth goal of the season.

The home side weren’t done. They upped the game and pressurized the visitors till they were awarded a penalty in the 58th minute. The in-form Silas Nwankwo took the responsibility and scored to seal victory for the hosts. That was Nwankwo’s 11th goal of the season.

Nasarawa United will have to wait to confirm their position on the league table because of the game at the Ahmadu Bello Stadium between Kano Pillars and Akwa United wasn’t concluded due to crowd trouble. Match proceedings were going on fine until the 84th minute when Nyima Nwagua scored a goal that was ruled offside. The centre referee was trying to clarify the decision with his assistant when fans encroached the pitch and the match was abandoned.

The match was goalless at the time it was halted and will be concluded tomorrow morning. If it ends goalless, Nasarawa United will move to second on the log with 48 points while Akwa United will top the table with 49 points.

A similar incident happened at the Ahmadu Bello Stadium. Precisely on matchday 25. Kano Pillars beat 2-1 and the moment Ifeanyi Eze scored the winner, the fans took over the pitch. The fans’ presence was also felt on the pitch when the final whistle went off. This is a breach of the Nigeria Football Federation directive that fans should not be allowed into match venues in order to respect safety rules and protocols and limiting the spread of the Coronavirus.

The League Management Company and the Nigeria Football Federation are yet to make an official statement on the fans’ trouble that happened in Kaduna on matchday 25 and today’s incident.

Katsina United produced arguably the most shocking result of the matchday beating Enyimba FC 3-1 at the Muhammadu Dikko Stadium. Before half-time, the hosts were leading 3-0. Samuel Kalu opened scoring in the 19th minute while Rasheed Ahmed doubled the lead in the 38th minute. Just before half-time Mahmud Abdulwasiu scored to give the Changi Boys a comfortable lead into the break.

Anayo Iwuala pulled one back for the People’s Elephant but the damage was already done. This is their 7th defeat of the season and the first time Enyimba will be conceding 3 goals in the league since January 2020 when they lost 4-0 to Plateau United.

Indeed, matchday 27 produced a festival of goals. In Enugu, Rangers International Football Club got their league campaign back on track with a 4-1 spanking of Sunshine Stars. Ifeanyi Nweke, Israel Abia , Godspower Aniefiok and Ibrahim Olawoyin scored goals for the Flying Antelopes to record the 12th win of the season.

In Bauchi, Wikki Tourists and FC Ifeanyi Ubah produced a 7-goal thriller. The goals kept pouring in. Nafizi Yahaya scored hat-trick to give the hosts victory. But when they were getting complacent at 4-0, the visitors started a late fight. Under 12 minutes, Ekene Awazie scored a brace while Nonso Nzediegwu scored one in the 90th minute. They would have gotten something out of the match if there was more time but they started the comeback fight too late. It’s just the 7th win of the season for Wikki Tourists but it’s huge relief for a team hoping to avoid the drop.

After losing 1-0 to Sunshine Stars on matchday 26, Dakkada was hoping to avoid back-to-back defeats when they filed out to take on struggling Warri Wolves in Ozoro. Warri Wolves also lost their match, a 3-1 defeat at Nasarawa United. Due to inconsistent league results, the Warri based are also battling to keep top flight status. Pre-match analysis favoured Warri Wolves to beat Dakkada.

But beating big teams is not new to the ‘small’ team from Uyo. Last season, they beat Rangers 2-0 at the Cathedral in Enugu. This season, they’ve beaten FC Ifeanyi Ubah in an away fixture and were seeking a second away win.

The game in Ozoro witnessed both sides creating chances but the no goal was scored until the 61st minute when Kareem Abdoulaye scored for the visitors. Warri Wolve pushed and searched for the equaliser but it didn’t come. Dakkada won 1-0 to add to the woes of the home side that have lost 14 games this season and not battling relegation.

Adamawa United confirmed they will not go down without a fight. Coach Justin Magudu’s team sits comfortably at the bottom of the league table with just 16 points from 26 matches. They lost their last match 2-1 to Enyimba but today, against Rivers United, they were ready to prove a point. And they did!
An early goal scored by Hassan Surajo gave the ‘small’ team the lead and just before half-time, Fabian Nworie’s own-goal gave Adamawa United a 2-0 lead into the break. When play resumed, Rivers United couldn’t do much to get back into the game. It finished 2-0. Shocking!

It’s just a 4th win of the season for Adamawa United and doesn’t make much difference to their survival fight but it’s a victory for the records and seals bragging rights over a big team as Rivers United.

A late goal scored by Christopher Nwanze gave Kwara United a crucial 1-0 win over MFM Football Club of Lagos. The win also means the Harmony are still unbeaten at home this season. With Rivers United losing to Adamawa United, the win takes coach Abdullahi Biffo’s team back into the top four. A position they have maintained since the start of the campaign and such consistency confirms their zeal to compete for the league title.

Since losing 1-2 to Nasarawa United on Sunday, 3rd January, Heartland FC have not lost a game at the Dan Anyiam Stadium in Owerri. Today, they held on to a hard fought 2-1 victory over Jigawa Golden Stars.

Two minutes into the match, Nwaodu Chukwudi scored the first goal for the hosts. With the constant forward play, Coach Fidelis Ilechukwu’s team showed that they wanted the win and moments later, Emeka Atuloma scored the second that sealed the victory. It’s the 10th win of the season for the Naze Millionaires and shoots them into the top ten.

Another them with home invincibility is Abia Warriors. Since the team moved to Okigwe from matchday 6, the Warriors have won 8 matches out of 11 and drawn 3. They have scored 22 goals at home and conceded just six.

Today, first-half goals from Chukwuemeka Obioma and Paul Samson gave coach Imama Amapakabo’s team a 2-0 win over Lobi stars who were hoping to consolidate on their matchday 26 win over Rangers in Markurdi. The Warriors are now unbeaten in six matches.