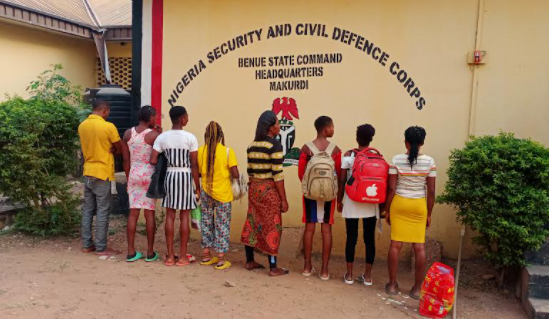 The Nigerian Security and Civil Defence Corps NSCDC have nabbed a suspected human trafficker with six unsuspecting young female victims who she had already prepared to take abroad.

The suspect, Mnena Kwaghmande was said to have been intercepted opposite Amaco Hotel in Gboko, Gboko Local government area of Benue State on January 5, 2022 with the victims all ready to travel to Burkina-Faso.

Parading the suspect and the victims before newsmen at the State Command of the NSCDC on Monday evening, NSCDC State Commandant, Dr. Philip Okoh said on interrogation, it was discovered that the suspect had told parents of the young girls whom she picked from Vandeikya LGA that she was taking them to go and sell food for her at her food restaurant in Burkina-Faso.

“We are showing to the public what we have done so far in terms of securing Benue State and ensuring peace. Behind me we have a seasoned trafficker who goes about luring unsuspecting parents through convincing them that they are going abroad for greener pastures. Investigation has revealed that they were taking them to Burkina Faso. We did this operation in conjunction with NAPTIP.”

Okoh warned parents against releasing their wards to people who promised them greener pastures abroad stressing that such journeys had and are still landing many in unimaginable troubles.

Speaking with our Correspondent, the victims whose ages range from 16 to 20 years said the suspect, whom they identified as their relative had told their parents that she was sick and therefore needed them to go with her to Burkina-Faso so that they can help sell at her restaurant.

Asked if they are aware that such trips had made many young ladies become sex slaves or victims of ritual killings, the girls said they were not aware.

The Command also paraded a suspected POS armed robber identified as Iorchivir Caleb. He was reportedly arrested with a locally made pistol while he was trying to rob a POS merchant along George Akume Way in Makurdi the state capital on January 7, this year.