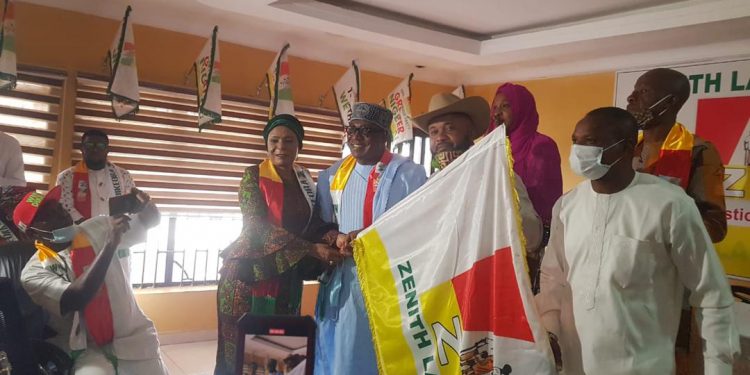 The Zenith Labour Party (ZLP), yesterday unveiled Dr Obiora Okonkwo as its candidate for the exercise and demanded a thorough scrutiny of all candidates, through a public debate.

National chairman of the ZLP,  Dan Iwuanyanwu, who performed the ceremony Wednesday in Abuja, described candidates of some of the other political parties as pretenders to the throne, citing their faulty nomination processes.

He said: “Anambra state here we are. It is going to be a tough battle. We have some candidates of other parties who are pretending to be candidates; whose candidates have been jaundiced by their faulty nomination process.

“Unfortunately, the Independent National Electoral Commission INEC has no power to disqualify them for now. This is an opportunity ZLP should not miss because if you check the calculations in Anambra, you might say it is too close to call but it will end in favour of the ZLP.

In his address, Dr Okonkwo who was flanked by his running mate, Dame Jessie Balonwu accused the Willie Obiano administration of criminally denying Anambra people their rights to quality representation at the local government level, due to his refusal to conduct local elections since he came on board.

He said he would conduct local government elections within his first one year in office, if elected.

“In my recent letter to Ndi Anambra, I reiterated the commitment of my administration to conduct local government elections within the first 12 months.

“The APGA leadership has criminally denied the people this right which is constitutionally guaranteed in Section 7(1) of the 1999 Constitution of the Federal Republic,” Okonkwo stated.

The rural communities, he said, have become even more impoverished because of the refusal of successive administrations in the state to return power to the people through the conduct of local government elections. As a result, our people have been denied the right to participate in their own governance.

He added: “Basic development projects and programmes which elected local government authorities should bring to their people have failed to materialize because of the decision of the APGA government in the state to undermine local councils by refusing to release to them their statutory allocations.

“At the base of political governance, independent local councils are foundational to grassroots development in Nigeria and it is in recognition of this that we pledge to conduct free and fair local government elections in Anambra State within our first 12 months in office as governor and deputy governor.

“This is a most solemn commitment from us never to deny the people their right to elect their leaders at the local government level.

“We are as worried as every other Anambrarian that our dear state has not actually progressed in terms of infrastructural and human capacity development despite being governed by democratically elected individuals since 1999”, Dr Okonkwo added.