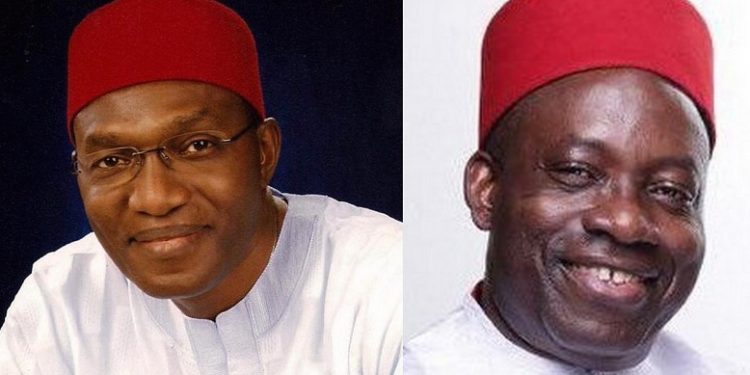 Governorship candidate of the All Progressives Grand Alliance (APGA), Prof. Chukwuma Soludo has hit back at his opponent, Sen. Andy Uba, for describing him as a learner in the game of politics.

Uba who is the candidate of the All Progressives Congress (APC), had told Daily Sun that Soludo and the candidates of the other parties including Valentine Ozigbo of the Peoples Democratic Party (PDP) and Obiora Okonkwo of the Zenith Labour Party (ZLP) posed no challenge to his ambition.

The coordinator of Uba’s media office, Arinze Igboeli, said the APC, being the party at the centre, had many things working for it and that everything would fall into place in favour of Uba and his party.

Irked by those statements, the erudite professor, Soludo, who had governed the country’s apex bank, the Central Bank of Nigeria (CBN), fired back at him, describing him as a total failure.

Soludo lampooned Uba for “wasting” eight years as a presidential aide and another eight years as a senator without any tangible achievement, saying that Ndi Anambra would resist his plot to waste their next four years and resources as well.

Deputy Director, APGA Campaign Media Directorate, Emeka Ozumba, in a statement, said Uba did not have what it takes to run for the exalted office.

“As a matter of fact, he is the least qualified and most unpopular among those vying for the number one position in the state.

“He is, in the words of Walter Lippman, the American political commentator, a pleasant man who, without any important qualification for the office, would like very much to be governor.

“It is an irony of life that a man who has never campaigned for any office he has occupied, but only believes in sorting things out, is now claiming to be a veteran of campaigns who has foot soldiers and people willing to campaign for him with their own resources.

“Who can claim to have seen Andy in any campaign past and present, even in the primaries that produced him? It beats reason to think that a man who has never been seen nor heard in every election he had contested is now claiming to have what it takes to win.

“What does Uba have? Charisma, oratory or popularity to make him the man to beat? Unless, there is more to this than meets the eyes; everybody knows that Andy is the least to talk about outvoting anybody on November 6, much less Soludo.

“It is in the nature of the people surrounding Andy to brag about his connection to the centre. And given that we are the party at the centre, you should also understand that a lot of factors will come into play for us”, the statement partly read.

The ex-CBN boss also lashed out at the former lawmaker for criticising Governor Willie Obiano, telling him that Ndi Anambra would gladly choose Obiano over and again rather than have him rule over them.