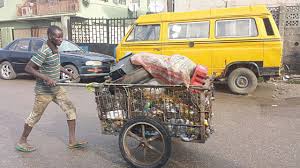 Ogun State Government says it has banned all waste cart pushers from operating in the state with immediate effect.

The government said recent security reports had indicted the waste cart pushers of complicity in crimes across the state.

The Special Adviser to the Governor on Environment and Chief Executive Officer of the Ogun State Waste Management Authority, Ola Oresanya, disclosed this in a statement in Abeokuta, the state capital.

Oresanya said the activities of the cart pushers constitute a security risk to the residents of the state.

Any waste cart pusher caught operating henceforth in the state will be arrested and his cart crushed.

He said, “While they are operating, our people innocently open their premises and commercial outlets to them for the evacuation of their wastes, but unknowingly to them, these cart pushers who are mostly foreigners collate vital information on how to compromise the security of their premises and pass them to the men of the underworld and sometimes join them to rob and terrorize our people.”

The Governor’s aide said apart from their security risk, the cart pushers “deface the aesthetic beauty of the state by their indiscriminate dumping of refuse.”

He said, “Their exit is a good riddance to a bad rubbish.”

Oresanya, therefore, called on the residents of the state to patronize Waste PSP in the area for prompt, effective, and structured service.

He added that the new waste management economic programmes of waste reduction, waste use, and waste recycling of the state government “are already providing employment opportunities for the youths and the women across the state.”

US Congressman-elect Letlow dies of COVID-19