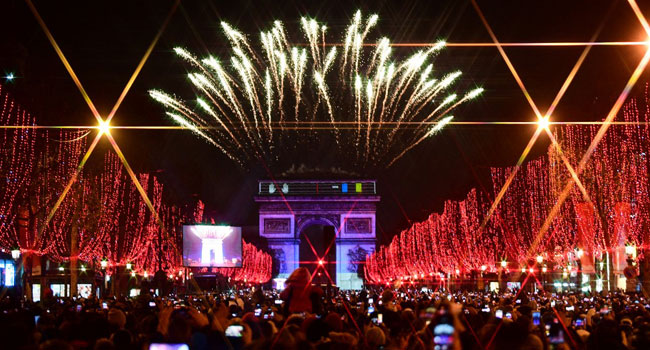 Paris on Saturday said it was cancelling its traditional New Year fireworks as Europe braced for tighter curbs to rein in the spread of the new strain of the coronavirus fuelling a resurgence in Covid-19 cases worldwide.

EU chief Ursula von der Leyen has warned the Omicron coronavirus variant could be dominant in Europe by mid-January.

Many countries have decided to reintroduce travel restrictions and other containment measures since it was first detected in South Africa last month.

“With regard to the acceleration of the pandemic, and the risks related to the end-of-year festivities, authorities should impose significant restrictions,” France’s scientific panel said.

And Paris municipal authorities announced “with regret that we will have to cancel all the festivities planned on the Champs Elysees on December 31.

“The fireworks will not take place, nor unfortunately will there be any DJ sets,” the mayor’s office told AFP.

On Friday, Germany designated France and Denmark as high-risk zones, and said it would impose quarantine on unvaccinated travellers from its two neighbours, starting from Sunday.

In Ireland, bars and restaurants will have to close from 8:00 pm from Sunday until January 30, prime minister Micheal Martin announced.

Denmark, which this week had the highest per capita new Covid infection rate, said it would close cinemas, theatres and concert halls and restrict restaurant opening hours.

And Switzerland is also stepping up anti-Covid measures from Monday as the country battles an intense fifth wave of the virus, which has killed at least 5,335,968 people since the outbreak emerged in China in December 2019.

The Dutch government is scheduled to hold an emergency meeting on Saturday afternoon after its team of expert scientific advisers recommended new restrictions to rein in Omicron, media reports said.

According to the reports, the government will hold a news conference at 1800 GMT to announce the new measures.

A number of countries are opening up their immunisation drives to younger children, even though the EU’s health agency has warned that jabs alone will not be sufficient to stop the variant’s rise.

In Portugal, where 88.9 percent of the population is vaccinated, more than 60,000 children aged between five and 11 were set to receive their first jab of the Pfizer Covid-19 vaccine this weekend.

And in France, Health Minister Olivier Veran said that jabs will start to be administered to children in the same age group from Wednesday.

“If all goes well, we will start vaccination of children on the afternoon of December 22 in specially adapted centres,” he told France Inter radio.

Nevertheless, the EU health agency ECDC has said measures like mask-wearing, distance working and the prevention of crowds were essential to reduce the burden on healthcare systems in the time available, with vaccines alone taking too long.

The United States was the first large country to take the plunge and has so far vaccinated more than five million children in the five-to-11 age bracket.

Denmark was one of the first European countries to open vaccination to all over-fives on November 26, though it is not compulsory.

Inside a converted commercial warehouse in a suburb of the Danish capital, seven-year-old William was one of a number of children waiting for their first Covid jab.

“I’m not scared, I’ve already done it 100 times,” he said, showing off to his younger brother.

Another youngster, Camelia, said she was more than happy to get the jab.

“Everybody in the family was vaccinated, I was the last one,” she said. “I’m happy I did it because now if I get corona, I won’t feel anything.”

Customs Intercept Container Suspected To Be Laden With Guns In Lagos