HomeNEWSCelebrate our troops with pride : Buhari

Celebrate our troops with pride : Buhari 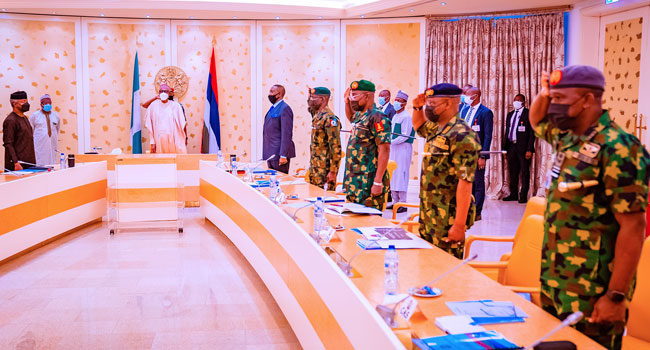 President Muhammadu Buhari, yesterday, called on Nigerians to celebrate members of the the armed forces as the pride of the nation given their exploits and sacrifices in maintaining peace, unity and stability of the country.

The president stated this at the 2022 Armed Forces Remembrance Day emblem appeal launch, an annual event to appreciate the gallantry, sacrifices and accomplishments of veterans of the first and second world wars and those engaged in peace support operations and internal security operations in Nigeria. He described the emblem as a sign of the sacrifices and blood shed by officers and men of the armed forces for peace and security of Nigeria.

A statement by Special Adviser to the President on Media and Publicity, Femi Adesina, said Buhari  paid tributes to veterans who devoted most of their active lives in securing the nation and the world, particularly those who paid the supreme sacrifice.

“Our country’s efforts at nationhood since independence have been challenged by civil strife, a civil war and much uprising and violent agitations. However, in spite of all these, the country has remained united and the resolve of the citizens for unity remains unshaken. The exploits of our armed forces to maintain peace as well as their disposition to the unity of Nigeria have contributed in no small measure to our stability.

We must therefore celebrate them as the pride of our country. Our faith in our armed forces remains unshaken and as a government we will do all within our powers to ensure that our armed forces are motivated to perform optimally. They have time and again demonstrated unparalleled patriotism, courage, loyalty and commitment as they grapple with the daunting challenges of defending Nigeria’s territorial integrity.”