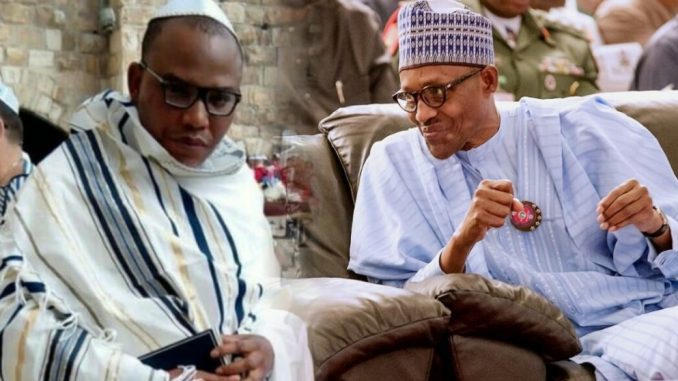 The Federal Government has ordered security agents to crush members of the Indigenous People of Biafra (IPOB) and other disgruntled elements bent on sabotaging the conduct of the Anambra gubernatorial election  slated for November 6.

IPOB had last week issued a one week sit-at-home order in the South East which is believed to be targeted at frustrating prospective voters, electoral officials and other logistics suppliers from coming out for the Anambra poll.

However, speaking during an emergency meeting between the Independent National Electoral Commission (INEC) and Inter Agency Consultative Committee on Election Security (ICCES) in Abuja, on Monday ,  National Security Adviser (NSA), Babagana Mungono, warned that security agents would not tolerate any act of lawlessness during the conduct of the poll in Anambra.

He said the right to vote in an election was legitimate and charged security agencies to ensure that no voter was denied the right to exercise his franchise  on November 6 in Anambra.

He tasked security agencies assigned to the state to act professionally but firmly in creating an atmosphere devoid of rancour, apprehension, tension, and all factors that lead to suspicion and people ending up in courts after the poll.

At least six people have reportedly been killed while several others were abducted after bandits on Sunday evening raided Unguwar Samanja village in Faskari local government area of Katsina State.

Residents of neighbouring Daudawa told newsmen that the bandits arrived at the village at 5:49 p.m. when residents where preparing for the dawn prayer.

A civil society organisation in Daudawa had cried out that despite the security measures taken by the state government, Faskari local government area has remained under attack.

President Muhammadu Buhari on Monday night  arrived Riyadh, the capital of the Kingdom of Saudi Arabia to take part in the Future Investment Initiative Institute conference.

He was received at King Khalid International Airport by the Deputy Governor of Riyadh, Prince Mohammed bin Abdulrahman Abdulaziz.

Buhari, with other world leaders, will participate in the opening ceremony of the event on Tuesday and the three-day plenary sessions, focused on the theme for the 5th edition of the summit, “Invest in Humanity”.

At the launch on Monday in Abuja, President Buhari said the adoption of the Central Bank of Nigeria Digital Currency (CBDC) can increase the nation’s Gross Domestic Product (GDP) by $29 billion over the next 10 years.

The digital currency, he said, has its underlying technology, called blockchain, that would enable the government to send direct payments to citizens eligible for specific welfare programmes as well as foster cross border trade.

He noted that Nigeria’s apex bank has invested heavily in creating a Payment System that is ranked in the top ten in the world and certainly the best in Africa.

Ole Gunnar Solskjaer is expected to remain in charge as Manchester United manager despite their heavy defeat at the hands of Liverpool.

The feeling within the club is that while the result was bitterly disappointing and painful for everyone, the immediate focus is on improving after picking up one point from their last four Premier League games.

United’s next two Premier League matches are against Tottenham and Manchester City, both live on Sky Sports, and they also face Atalanta in the Champions League next week.

But despite their poor results and huge external speculation, there is no suggestion from inside the club that Solskjaer’s job is under threat at this point.

Former Chelsea manager Antonio Conte has been in contact with United about taking over should they decide to make a change, though  there has been no contact between the parties.

Celebrate our troops with pride : Buhari