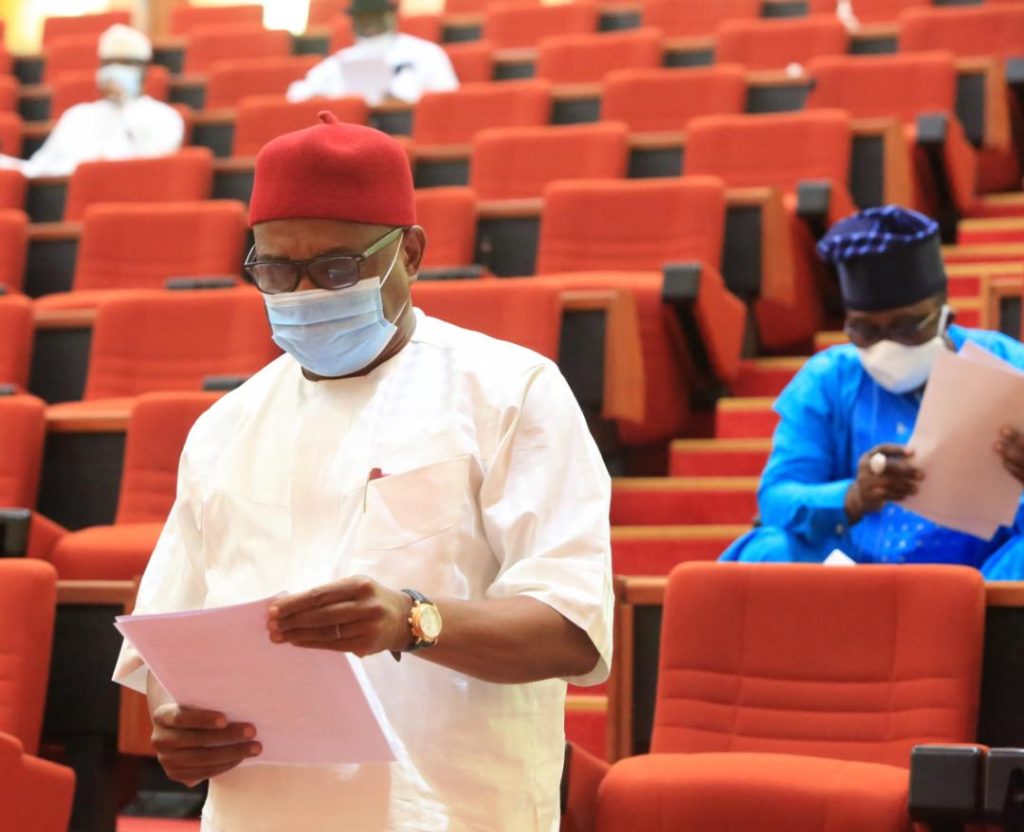 Resolutions to bring an end to illegal mining and gold smuggling in the country and investigation to an annual loss of 9Billion Dollars in Nigeria’s mining sector as a result of the aforementioned illegal activities were reached by the Senate on Wednesday.

The decisions were made following a motion moved by Abia-North Senator and Chief Whip of the Senate, Senator Orji Uzor Kalu on the need to investigate Nigeria’s yearly loss of 9 Billion US Dollars as a result of illegal mining and Gold smuggling.

The Senate in its plenary session presided by the Deputy Senate President, Ovie Omo Agege urged the Executive to intensify efforts to combat illegal mining activities and seal up all revenue leakages from such clandestine activities; and the Senate Committee on Solid Minerals, Mines, Steel Development and Metallurgy to investigate this matter and report back to the Senate in 6 weeks.

Earlier in his debate, Kalu disclosed that Nigeria lost close to $54b from 2012 to 2018 due to illegal smuggling of gold. While also pointing out that the country is said to be losing about $9 billion yearly to illegal mining and gold exportation, a huge amount of money unaccounted for through under the radar sales of the expensive commodity.

Kalu stated that the activities of unlicensed miners were becoming prevalent within the industry and the incessant smuggling of the solid mineral out of the country by middlemen and smugglers, is leading to loss of government revenue.

According to Kalu gold mining operations in Nigeria is capable of providing no fewer than 250,000 jobs and over $500 million dollars annually in royalties and taxes to the federal government and as mineral resources.

Raising additional concerns Kalu explained that jobs and revenue accrued to the mining sector would further diversify the nation’s economy and improve the foreign exchange reserve. He elucidated that due to Nigeria’s current estimated gold reserves of over 200million ounces, most of which have not been exploited, developing sustainable programmes that will catalyze increased investment in the extraction and refining of gold sourced from mines in Nigeria, is indeed vital.

Kalu argued that if the country conserves its gold reserves, and ensures effective exploitation, the accruing revenue would surpass that of oil and gas.

Kalu drew the attention of colleagues to section 44 (3) of the Nigerian Minerals and Mining Law of 1999 which provides that ownership and control of all minerals in Nigeria are vested in the federal government, which is mandated to manage such natural resources in a manner as may be prescribed by the National Assembly.

In his lead discourse, Senator Kalu told the Senate illegal mining is a major factor responsible for the stunted growth in the mining sector.

He said “Distinguished colleagues, you will agree with me that illegal mining is one of the key challenges hindering the development of Nigeria’s mining industry. If we don’t fix this hemorrhage of our economy, we would literally bleed to death.

“In fact according to Signal One International, SOI, a US-based company, disclosed in a 2016 report that Nigeria has lost over $50 billion in gold revenue tax in two years as a result of illegal mining and exportation of unprocessed gold. Also reports from the Nigeria Extractive Industries Transparency Initiative, NEITI indicated that Nigeria lost about nine billion dollars to illegal mining operations and gold exportation from 2014 to 2015 and in six years accrued to $54 billion dollars”, Kalu concluded.

Contributing to the debate Senator Smart Adeyemi expressed support for the motion, the Kogi west Senator raised concerns about the global drop in the demand for crude oil and gas which was the nation’s main source of revenue. He stressed the need to protect the mining sector which would serve as an alternative source of revenue for the country.

In his words ” The global economy today is contemplating how to reduce the use of crude oil and gas. In years to come many nations that depend on oil and gas will start looking at renewable energy. In essence, pioneer producing nations will start looking for an alternative. Today countries are finding it hard to sell their oil.

“If you look at Zamfara state there is an enormous deposit of Gold. In the night you see trailers conveying foreigners and these are people involved in illegal mining. We have to engage the executives because the solid mineral sector needs serious attention beyond just talking.

Senator Ajayi Borofice in his support of the motion said the Nation’s Gold deposit was beyond that of South Africa, stating the need for the sector to be protected from exploitation.