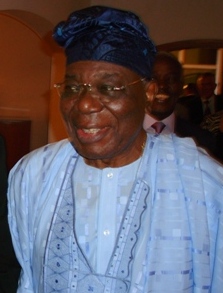 The death of former Head of the Interim National Government, Chief Ernest Shonekan may be taking a toll on the federal government as President Muhammadu Buhari has directed that the national flag be flown at half-mast, effective from Wednesday 12th – Friday 14th, January, 2022.

The circular which emanated from the office of the Secretary to the Government of the Federation, under the purview of Boss Mustapha, is intended to serve as a mark of respect for the former Head of State who died on Tuesday, in Lagos at the age of 85.

Shonekan succeeded General Ibrahim Babangida’s administration to become the Head of the Interim National Government between August 26 and November 17, 1993.

General Sani Abacha who is also late ousted Shonekan in a bloodless coup.

Since the death was announced, President Buhari and other national leaders have been sending condolence messages in honour of the late elder statesman.