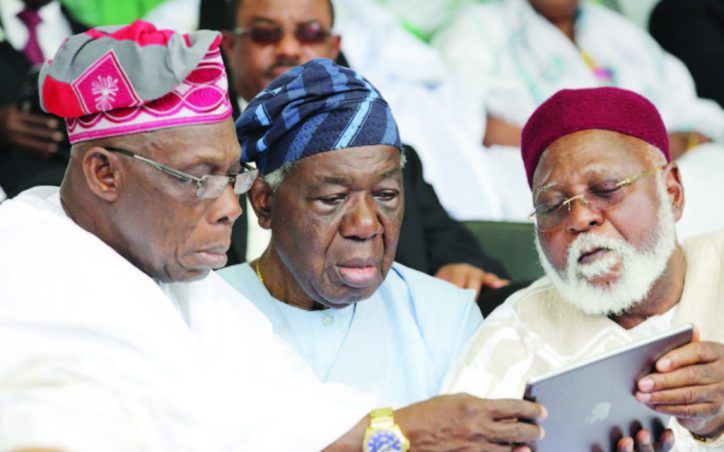 The retired General declared that his contribution to the growth and development of democracy cannot be forgotten.

Obasanjo, in a condolence letter to Mrs Margaret Shonekan on Tuesday, noted that her husband was a role model and patriotic citizen.

He said the deceased was a man who had a strong will to succeed despite coming from a humble background.

Obasanjo recalled how Shonekan rose to the top of corporate management with his chairmanship of the United Africa Company (UAC).

“He founded, in 1994, the Economic Summit Group, an advocacy group and think tank for private sector-led development of the Nigerian economy.

“It remains till today, sustaining the legacy of helping to support stakeholders in the execution of policies, programmes and strategies in response to any emerging trends in national and global economies.”

Obasanjo, currently on international assignment as the High Representative of the African Union (AU) for the Horn of Africa, said he received the news with great shock.

On the political scene, Obasanjo maintained Shonekan did well as leader of the ING in 1993, cut short through the palace coup orchestrated by General Sani Abacha.

“As Special Envoy on the Implementation of the Abuja Agreement on Zimbabwe in 2001 under my administration, and Chairman, Infrastructure Concession Regulatory Commission (ICRC) under Yar’Adua’s administration in 2008, he was forthright, dedicated and showed great patriotism.

“He was a unifying force for the nation and his contribution to the growth and development of democracy in Nigeria cannot be forgotten in a hurry. In all situations, he lived nobly and he died in nobility. He was an achiever.

“Indeed, Chief Shonekan died at a time the country is in dire need of his leadership, wealth of experience and wisdom to tackle the multifaceted challenges facing the nation,” Obasanjo was quoted as having Obasanjo added.