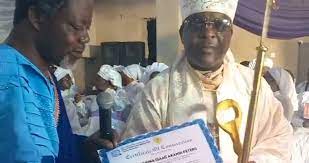 Popular afro juju musician, Sir Shina Peters, has been ordained as a bishop of the Cherubim and Seraphim Church.

He was ordained at a ceremony in the Iju area of Lagos.

The 62-year-old musician took to his Instagram account where he posted a video of him collecting his certificate of consecration. In the caption section of the video, SSP, wrote, “Bishop with the swagger. God above all.”