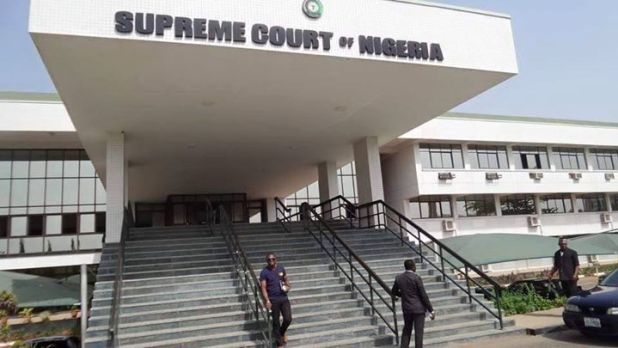 The Supreme Court has reserved judgment in the N66 billion suit instituted by the 36 states aginst the Federal Government bordering on the funding of capital and recurrent expenditure of courts of record in states of the federation.

In the suit marked SC/CV/655/2020 and dated September 16, 2020, the federating states are specifically seeking an order of the apex court compelling the federal government to take up the funding of High Courts, Sharia Courts of Appeal and Customary Courts of Appeal.

The states are asking for the refund of a total sum of N66 billion they claimed the 36 states have expended in the maintenance of these courts in their respective states.

In addition, they are further asking the apex court for another order setting aside the Presidential Executive Order 10 on the grounds that same was in violation of the express provisions of the constitution.

Meanwhile, the apex court reserved judgment after taking submissions of parties for and against the suit as well as from five amicus curiae invited by the court to speak on the matter.

Justice Datijo announced that judgment of the panel has been reserved to a date that would be communicated to parties in the matter.

Before judgment was reserved, the five amicus curiae (Lawyers invited as friends of the court) invited by the court over the issue gave different opinions on the issue.

But Agbakoba, however, disagreed with the plaintiffs on the issue of refund, stating that nobody in the first place asked them to assume responsibility for the capital expenditure of the three courts.

The two amicus curiae who spoke in favour of the federal government were: Mahmood Magaji, SAN, and Musibawu Adetunbi, SAN.

It was their submission that the constitution was clear as to the responsibility of the federal government in respect of the three courts, adding that the apex court should not be tempted to disrupt the system.

However, Adetunbi was in agreement with the plaintiffs on the issue of Executive Order 10, which he said should be set aside for being unconstitutional.

The 36 states’ Attorneys General and Commissioners for Justice had last year dragged the Attorney General of the Federation (AGF) to the apex court over the refusal or failure of the federal government to fund courts of the federation.

In the suit filed on behalf of the states by Mr Augustine Alegeh, SAN, they want to know whether having regard to the provisions of Section 6 and 81(3) of the Constitution read together with item 21(3) of the third schedule, the defendant is not constitutionally obligated and or charged with the responsibility for funding all capital and recurrent expenditure of the High Courts, Sharia Courts of Appeal and Customary Courts of Appeal at the states of the federation being courts created under section 6 of the constitution.

They asked “considering provisions of Section 6, 80, 81, 120 and 121 whether the Presidential Executive order number 10 of 2020 made by the president on May 22, 2020, to compel the plaintiffs to fund states’ High Courts, states’ Sharia Courts of Appeal and Customary Courts of Appeal in violation of the constitutional provisions vesting responsibility for funding the said courts on the federal government is not unconstitutional and unlawful.

Among the nine reliefs sought by the plaintiffs are an order compelling the federal government to henceforth fund all capital and recurrent expenditure of the High Courts, Sharia Courts of Appeal and Customary Courts of Appeal of the states of the federation being courts created under Section 6 of the constitution.

Plaintiffs are also asking for an order compelling the defendant to refund to the plaintiffs all sums expended in funding the capital expenditure of the above three courts ought to have been expended by the defendant.

At Monday’s proceedings, the lead counsel to the plaintiffs, Alegeh, submitted that the three courts are courts of the federal government and as such funding of their capital expenditure should flow from the Consolidated Revenue funds of the federation.

The senior lawyer further argued that since the salaries and emoluments of the judges of the three courts are being paid by the federal government, section 81 of the 1999 Constitution should be revoked to place the responsibilities of funding their capital expenditure on the federal government.

He, therefore, urged the seven-man panel led by Justice Musa Datijo to rule in favour of the plaintiffs and grant the nine reliefs sought in the originating summons.

Responding, the AGF’s lawyer, Mr Tijani Gazali, SAN, vehemently opposed the request of the plaintiffs, stating that the current action of the federal government was based on a judgment of a Federal High Court, which according to him, the plaintiffs have never appealed up till this very day.

Gazali who is from the office of the AGF, further pointed out that the issue of salary and emoluments are expressly stated in the constitution as the responsibility of the federal government, but that the section was silent on the capital project.

He argued that since the states have been responsible for the funding of capital expenditure of the courts since 1999, the position should be maintained.

Gazali called on the apex court to dismiss the suit and award substantial cost against the plaintiffs.

After listening to all the parties, Justice Datijo announced that the judgment of the panel has been reserved to a date that would be communicated to parties in the matter.