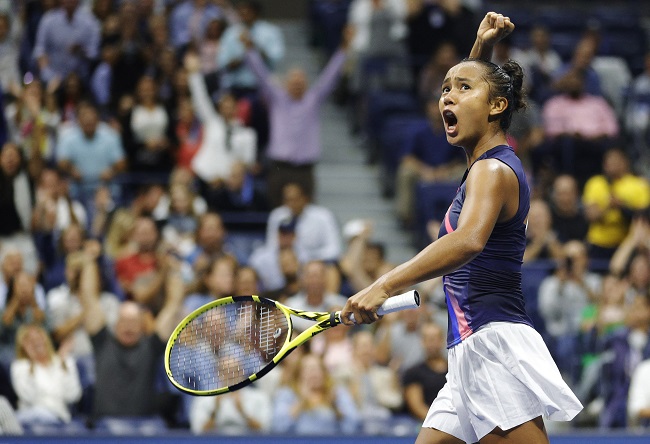 From her father becoming a tennis coach with no experience to her mother moving away to support the family, Leylah Fernandez’s dream run to the US Open has been a family affair.

Her father Jorge, a former footballer from Ecuador, became a tennis coach to support his daughter’s dream and still plots the 73rd-ranked left-hander’s strategy for every match.

So Fernandez was shocked when she video-called him in their Florida home after her greatest-ever victory and he asked how she did because he was watching a football match.

“He joked he watched a soccer match,” Fernandez said. “He enjoyed (my match). He had a big smile.”

After the match, Fernandez related the tale of how her mother, a Canadian of Philippines heritage, moved to the United States to make money to support the family and her tennis dream.

“My mom had to go to California for a few years to support my family and I in the tennis world,” she said. “That few years been definitely hard for me because I needed a mom, I needed someone to be there for me through the age of 10 to 13.

“I’ve barely seen her at that time. Every time I saw her, it was like seeing a stranger but at the same time someone so familiar.”

That’s one reason why she is so happy to have her mother watching every match in the stands at the US Open.

“I was just very lucky to have my mom here at this tournament cheering for me and having fun with me all this time,” Fernandez said. “We’ve gone through so many things together as a family. I’m just glad that right now everything’s going on our side.”

“It was definitely hard at first to accept,” she said of her mom leaving.

“I don’t think I only did the job, but also my parents, my dad. He also made the decision one day to pack our things, go to the US so we can be with my mom because it was too much.

“You know what? I’m just glad that we made that decision of doing that, like having my mom go to California, because it made me stronger.

“I think it made my family, too, saying that we’re going to make the sacrifice, it’s going to be worth it so I can make that dream possible.

“I’m just eternally grateful for everything that’s happened to us.”

“I’m glad I finally made her cry and it’s tears of joy,” Fernandez said.