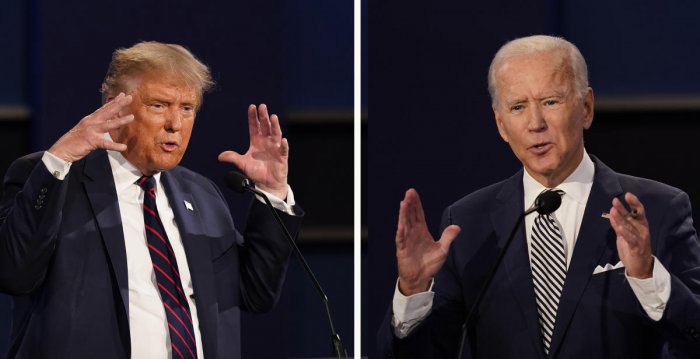 But the Trump campaign team vowed to reverse them at the vote count and in the courts, ushering in a potentially prolonged  endgame to the election and sparking tension across the United States.

Biden was called the winner in the critical battleground of Wisconsin, and was ahead in Arizona, Michigan and Nevada, while Republican President Donald Trump held leads in Pennsylvania, Georgia and North Carolina.

According to The Guardian, if the current standings are sustained, it would take Biden over the 270 votes in the electoral college needed to clinch victory, even without the deadlocked state of Pennsylvania, where a million ballots were yet to be counted by Wednesday afternoon.

Trump has demanded a recount in Wisconsin and called for the count in Michigan to be halted, on the grounds that its representatives did not have “meaningful access.”

Starting with a television statement after 2am, Trump repeatedly claimed that the routine counting of ballots after election day was somehow fraudulent.

Trump campaign officials were reportedly supporting continued vote counts where the president was behind and vigorously opposing them where he was ahead.

Trump also staged a rally of his supporters outside a convention centre in Philadelphia where votes were being counted, echoing Republican tactics to ‘stop the recount in Florida 2000,’ which helped win the election for George W Bush.

The 2000 election was finally decided by the US Supreme Court, and on Wednesday afternoon, the Trump campaign also asked the Supreme Court to rule on its objections to an extended vote count in Pennsylvania.

The Biden camp assembled its own legal teams at the chief electoral flashpoints, and launched a “fight fund” to finance the effort.

As of 10.48pm Nigerian time, Biden had inched closer to the 270 points needed to win the presidency scoring 253 points, while Trump is lagging behind with 213 points  in the electoral college system.

Meanwhile, a Nigerian-American, Esther Agbaje, has won the Minnesota House of Representatives seat in the 2020 United States election.

Agbaje defeated her closest rival, Alan Shilepsky, by a landslide.

Shilepsky, a nominee for the Republican Party, scored 4,128 votes, representing 17.7 per cent of the total votes cast.

Thirty-five-year-old Agbaje confirmed that she would be representing District 59B in the Minnesota House of Representatives on the platform of the Minnesota Democratic–Farmer–Labor Party (DFLP), an affiliate of the U.S. Democratic Party, on her website.

Earlier, another Nigerian-American, Oye Owolewa, was elected as a shadow member of the United States House of Representatives from the District of Columbia.

According to election results on the website of the District of Columbia Board of Elections on Wednesday morning, Owolewa polled 81.59 per cent of the votes, which represents 164,026 votes against Joyce Robinson-Paul, who scored 18,600 votes, and Sohaer Syed with 15,372 votes.