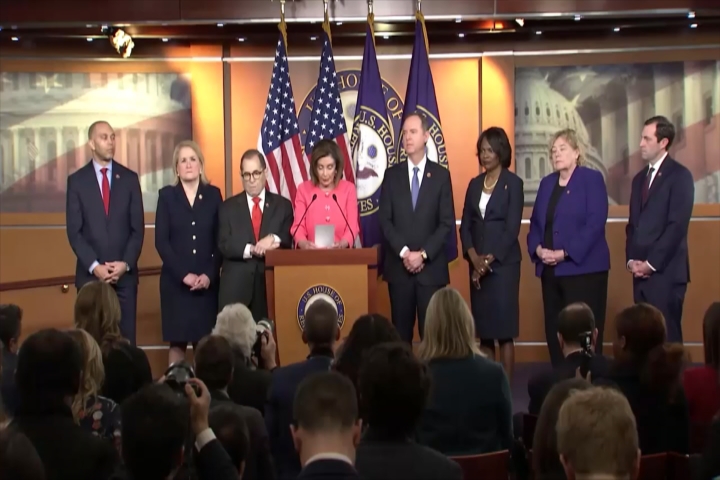 US House Speaker Nancy Pelosi has named nine Impeachment Managers to proceed with the removal of incumbent President Donald Trump.

“Tonight, I have the solemn privilege of naming the Managers of the impeachment trial of Donald Trump,” said Speaker Nancy Pelosi.

“It is their constitutional and patriotic duty to present the case for the President’s impeachment and removal. They will do so guided by their great love of country, determination to protect our democracy and loyalty to our oath to the Constitution. Our Managers will honour their duty to defend democracy For The People with great solemnity, prayerfulness and urgency,” she added.

It was earlier reported that US Vice President Mike Pence told House leaders Tuesday he does not support invoking the 25th Amendment process to remove Donald Trump, all but guaranteeing an impeachment vote against the besieged president.

“With just eight days left in the President’s term, you and the Democratic Caucus are demanding that the Cabinet and I invoke the 25th Amendment,” Pence wrote to House Speaker Nancy Pelosi, referring to the process that would declare Trump unable to fulfil his duties and install Pence as acting president for the remainder of the term.

“I do not believe that such a course of action is in the best interest of our nation or consistent with our Constitution,” he said.

Democrats mobilised rapidly to begin the process to have Trump removed after he encouraged his supporters last Wednesday to “march” to the US Capitol and “fight.”

In a violent insurrection, the rioters stormed past outnumbered police, rampaged through and ransacked the building, and interrupted Congress as it was certifying Joe Biden’s election victory.

Pence, who was presiding over the vote, as well as Pelosi and other lawmakers, were forced to take shelter. Five people died during the unrest including a US Capitol Police officer.

Trump to issue more than 100 pardons and commutations on his final day...

Internet was partially restored in Uganda on