HomeNEWSU.S. To Collaborate With Nigeria To Fight Terrorism

U.S. To Collaborate With Nigeria To Fight Terrorism 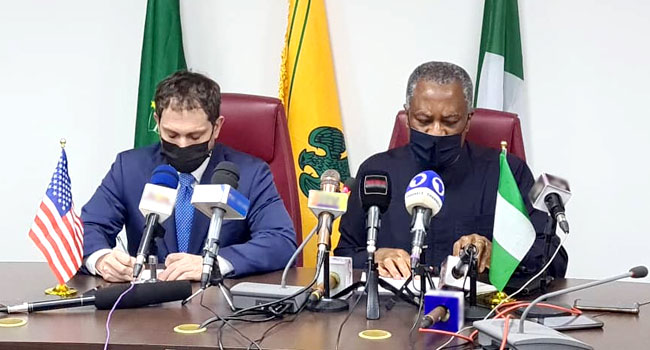 The United States Government is not only fighting terrorism within its territory but also extending a helping hand to Nigeria in a new move to address global terrorism.

As part of measures to tackle the menace, the US Deputy National Security Advisor, Jon Finer, met with the Minister of Foreign Affairs, Geoffrey Onyeama, on Monday in Abuja where modalities for collaboration between both countries were discussed.

Although there are plans for other areas of collaboration, tackling terrorism is a common priority for both countries.

According to the US official, the Joe Biden administration underscores the importance of mutual collaboration in areas of climate change, COVID-19, as well as tackling insurgency in the country.

“It is important and consequential for close relationship for the United States and I want to start by underscoring that,” said Finer.

“It is at the centre of so many of us, strategic priorities from getting our arms around the global pandemic to climate change to democracy agenda.”

On his part, Onyeama said the Nigerian government had a fruitful engagement – that bordered on cooperation on the coronavirus disease – with the United States.

He praised the US for providing over 3.5 million Pfizer vaccines delivered to complement the Nigerian government’s response in tackling the pandemic.

Nigeria has been battling terrorism for more than a decade now, with Boko Hara and Islamic State West Africa Province (ISWAP) emerging as the dominant forces in the conflict.

Since May when Boko Haram leader Abubakar Shekau killed himself to avoid capture by jihadist rivals, ISWAP has been consolidating in areas it controls in the North East.

The group split from Boko Haram in 2016 and rose to become the dominant jihadist group, focusing on attacking military bases and ambushing troops.

Thousands have been killed and millions displaced in the region as a result of the conflict which began in 2009, and the violence has spread over the borders to Niger, Chad, and Cameroon.