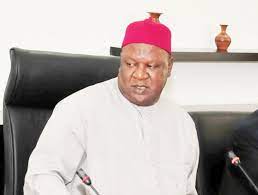 Ahead of the 2023 general elections, political gladiators in Ebonyi State are preparing for a tough political battle.

This is as the ruling All Progressive Congress, APC, led by the Governor, Chief David Umahi plots to retain power, while the main opposition, the People’s Democratic Party, PDP, strategizes to take over the governance of the State.

This, according to the PDP, manifested when the government shut down their State secretariat, located along Abakaliki/Enugu Expressway.

Governor Umahi debunked such claims, adding that the secretariat was closed as a result of COVID-19 infection that allegedly ravaged the area.

More tough political battles lie ahead with the recent move by Pius Anyim to run for the position of President under the platform of the People’s Democratic Party, PDP, while Governor Umahi, who is the chairman of the South-East Governors’ Forum, is also nursing the ambition to contest for President under the platform of the All Progressive Congress, APC.

This recent development has brought the question of age into the front burner of the national discourse on the 2023 race.

Two of the leading aspirants in the 2023 presidential election, Bola Tinubu and Atiku Abubakar will be 71 and 77 years old respectively by 2023.

Despite their age, Atiku is expected to clinch the ticket of the People’s Democratic Party, while Tinubu, a former governor of Lagos State already has political machinery mobilizing for him across the country, all gunning to replace President Buhari when he leaves office.

As schools resume for the 2021/2022 academic session, the Kaduna State Government has directed all public schools in the state to operate only four working days a week, between Monday to Thursday instead of the usual five working days.

The directive was given by the state Commissioner for Education, Halima Lawal, in a notice for school resumption for the second term of the 2021/2022 academic session.

The directive to public schools comes five weeks after the state government migrated to a four-day working week for all civil servants.

Governor Nasir El-Rufai’s spokesman, Muyiwa Adekeye, had explained that the decision was designed to help boost productivity, improve work-life balance, and enable workers to have more time for their families, for rest, and for agriculture.

Governor Samuel Ortom of Benue State has cautioned Nigerians against taking up arms against the Armed Forces and other paramilitary agencies over any disputes or disagreements, urging Nigerians to respect the uniform as a symbol of a sovereign nation and authority.

Ortom made the call at an interdenominational church service in honour of the Armed Forces Remembrance Day organized by the Christian Association of Nigeria and the Benue State Government at the Redeemed Christian Church of God in Makurdi on Sunday.

The governor lamented the gruesome killing of one officer and 11 soldiers in Konshisha Local Government Area of the state in 2021 and advised communities to sheathe their swords no matter the grievances, once the security forces intervene to bring peace to the people.

The Nigeria Army on Sunday said none of its soldiers was killed during a gun battle stemming from a disagreement over gold nuggets in Magama Village in Jibia Local Government Area of Katsina State.

General Onyema described the publications as baseless, unfounded, untrue and a mere figment of the writer’s imagination, aimed at tarnishing the reputation of the Nigerian Army.

He stressed that no Nigerian soldier was killed nor involved in any skirmish with illegal miners in Magama village on January 5 as was reported.

The past few days witnessed the killing of defenceless civilians already enduring a life of anxiety, food shortage, sounds of gunfire and fear of invasion.

Fleeing bandits murdered scores of Nigerians in communities along with Anka and Bukkuyum towns. The assault was widely condemned.

An intelligence operative who pleaded anonymity reported that the villages include Barayar Zaki, Rafin Gero, Rafin Danya and Kurfa.

Assuring of the sustained military onslaught, he confirmed the annihilation of a number of bandit commanders and fighters, saying that the labelling of bandits as terrorists has also given the Armed Forces the legitimate right to deploy full might during operations.

Friends and families on Sunday mourned the deaths of 10 people who died when a cliff collapsed and landed on tourist boats on a lake in Brazil after two people earlier reported missing in the tragedy were confirmed dead.

On Saturday, a large rock fragment broke free of a ravine and plunged onto four boats in Furnas Lake in Brazil’s eastern Minas Gerais state, as panicked tourists watched helplessly from other vessels.

More than 30 people were injured, including nine who had to be hospitalized.

The victims were all Brazilian nationals, aged between 14 and 68, according to preliminary investigations.

Famous music star and actor, Banky W has said that he struggled with promiscuity and pornography.

Banky W said this while advising young people to accept Christ, disclosing that he felt empty without Christ despite his success as an artist.

Revealing how God rescued him, Banky W in a recent interview said in the eyes of the world he was a successful artiste, nevertheless, he still felt empty and wretched all those times without God in his life.

President Muhammadu Buhari has appointed Femi Gbajabiamila, Speaker of the House of Representatives, to lead the Nigerian delegation to the African Cup of Nations, which began on Sunday in Cameroon.

This was made known by the Minister of Youth and Sports Development, Sunday Dare, in a letter addressed to Gbajabiamila dated January 6, 2022.

The delegation will convey the goodwill message of President Buhari to the Super Eagles of Nigeria, which will serve as a morale booster and further demonstrate the Federal Government’s support and commitment to the team during the tournament.

“The group stage matches of the Super Eagles have been scheduled to take place in Garoua, Cameroon, where Nigeria has been drawn to play in Group D alongside Egypt, Sudan, Guinea-Bissau on the 11th, 15th and 19th of January, 2022.