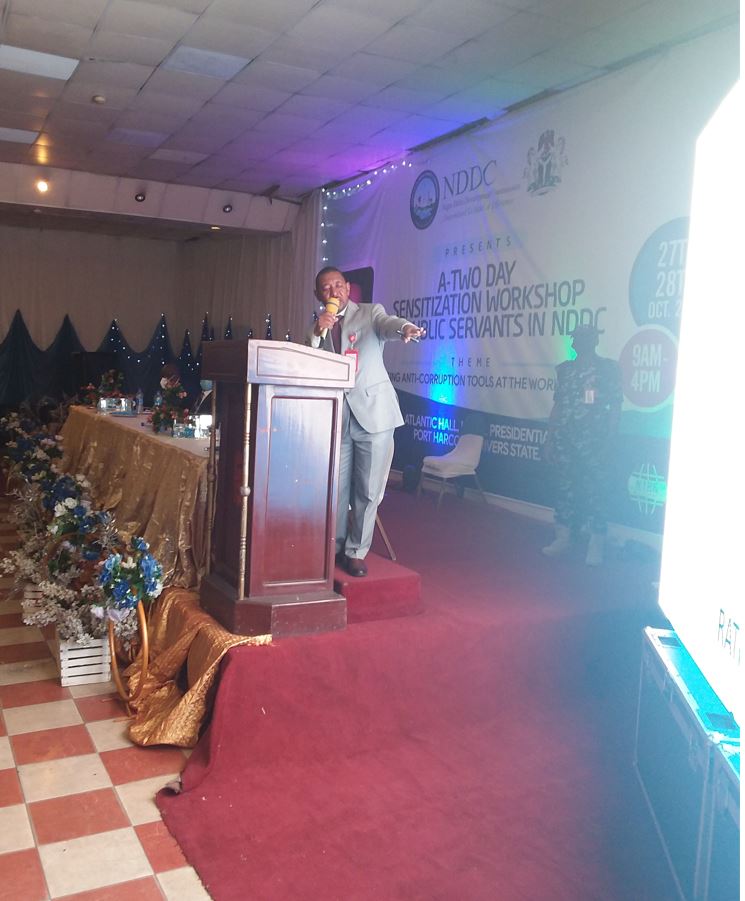 The Executive Chairman of the Economic and Financial Crimes Commission, EFCC, Abdulrasheed Bawa has called for good work ethics as an important anti-corruption measure among the staff of the Niger Delta Development Commission, NDDC.

He made the call in Port Harcourt, Rivers State on Wednesday while addressing the management staff of the NDDC at a Two- Day Sensitization Workshop for Public Servants in NDDC. Speaking on: “Official Corruption, Cause, Method, Effect and Remedy”, the EFCC boss stressed that organizational goals could only be achieved if employees embraced good work ethics.

He said Corruption is a monster which if not dealt with, will bring many organizations down. Employees should embrace good work ethics and perform their work with zeal and hard work.  With this, I am sure results will be achieved and counted.

Bawa, who spoke through the Port Harcourt Zonal Commander of the EFCC, Assistant Commander of the EFCC,   ACE Aliyu Naibi, also said that, even with good work ethics, corruption may still rear its head in organizations, and to tackle it,  “tough disciplinary measures should be put in place such that anyone found to have embezzled money or misused his office or any property should be handed over to the relevant authority for questioning”.

The EFCC boss laid bare causes of corruption, linking them to the “Fraud Triangle” of” Opportunity, Incentive and Rationalization”.  He decried the erosion of trust, weakened democracy, economic stagnation, inequality, poverty, social division and environmental degradation which are direct consequences of corruption and reiterated his commitment to “the fight against the menace called corruption until we have a Nigeria free of economic and financial crimes”.

Also, at the workshop, Chairman, Code of Conduct Bureau, Professor Muhammad Isah, spoke on “Asset Declaration as a Veritable Instrument to Prevent Corruption in Public Services” and stressed the importance of asset declaration by public officers.

According to him, public officers can only be measured on anti-corruption scales, if their assets are declared. “Asset declaration is an old scheme.  It is a tool to fight corruption.  It is a yardstick by which a public officer is measured”.

The workshop was declared open by the NDDC’s Interim Administrator and Chief Executive Officer, Effiong Okon Akwa, was attended by Directors and other management staff of the NDDC.