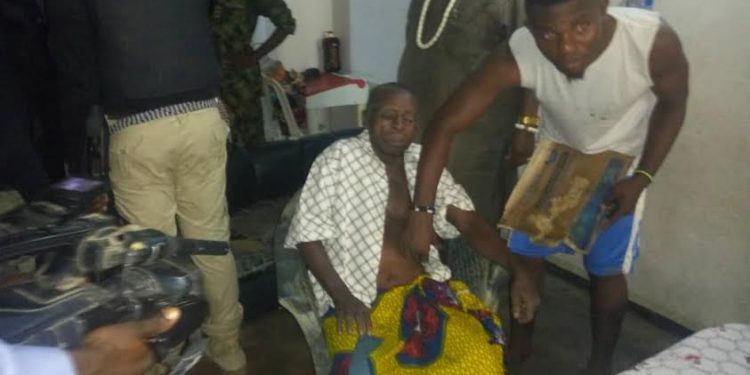 The Nigerian Army through ‘Operation Akpakwu’ has foiled an attempted kidnap of a traditional ruler, HRH, Muri Stanislaus Eyamba.

It was learned that the kidnappers numbering about four stormed the Calabar residence of Muri Eyamba, 80, who is also the Clan Head of Efut Ifako/Mkpara Ancestral Clan in Odukpani.
The kidnappers came under the guise of wanting to buy chicken from the traditional ruler, who operates a poultry farm within his residence, later whisking him away to the Edibe Edibe Beach in Calabar South.

Luck, however, ran out of the abductors when the community alerted the Operation Akpakwu team who immediately invaded the creek.

There at the creek, it was learnt that on sighting the crack team of soldiers, the hoodlums opened fire, the army team responding, causing the kidnappers to flee and abandon the traditional ruler who was later rescued.

The monarch was subsequently taken to a hospital for revival by the members of Operation Akpakwu led by Major SN Ikpeme.

An eyewitness and a grandson of the Muri, John Efa Eyamba, said the kidnappers came into the compound around 8:00 pm and requested to buy chicken.

Narrating the incident, Eyamba said: ‘When the security opened the gate for them, they said they have N2,000 to buy chicken and they were told that of N2,000 chicken has finished. They got angry and said they were not buying it anymore. But on their way out, they violently attacked the security man.

‘After that, they, brought out a gun and pointed it at the Muri who was sitting close by and took him into a car they came with and zoomed off.

‘Immediate we called the army alongside the security operatives and they came, did an investigation and went into the creek.’

According to him, the family tried to negotiate with the abductors on ransom before the army struck and rescued the grandfather.

Commending the army and their Operation Akpakwu team for the prompt intervention, a traditional ruler in the area, HRH Maurice Okon Eyo, said they are happy their colleague was rescued alive.

‘I thank the law enforcement agents for their quick response because that has succeeded in saving a life.’

NSE: The market bounced back on Tuesday as investors gained N5.6 Billion naira.