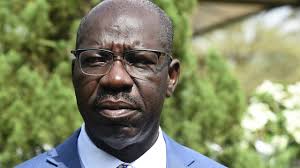 Workers of the Etsako West Local Government Area of Edo State have asked the council leadership to pay their salaries and training allowances.

The workers, who stated this at the local government training school in Bekuma, Akoko-Edo LGA, said they came for the training without being paid allowance and were being owed two months’ salary.

One of them, who declined to be identified said, “They promise the workers that they will give them books and  N50,000 for feeding and other expenses for the training. But for three months they have not been paid.

“The acting chairman of the council recently embarked on screening to weed out some workers which is a witch-hunt. Out of the 18 local government areas, 12 are being owed salaries.”

But the acting chairman of the council, Alhaji Imonofi Inusa, said the salary payment was a priority of the administration.

Inusa said, “The state government does not take the salary of workers lightly; so if any local government chairman is joking with staff salary, the governor will not take it lightly with such chairman.

On Bekuma school training allowances, he said, “Salary is statutory that we must pay, such allowance is not statutory, anytime that the council is comfortable they will be paid.”

He added that there were several over-aged workers in the council who are still in service using sworn affidavits and that he had written to the Local Government Service  Commission for screening to be carried out.