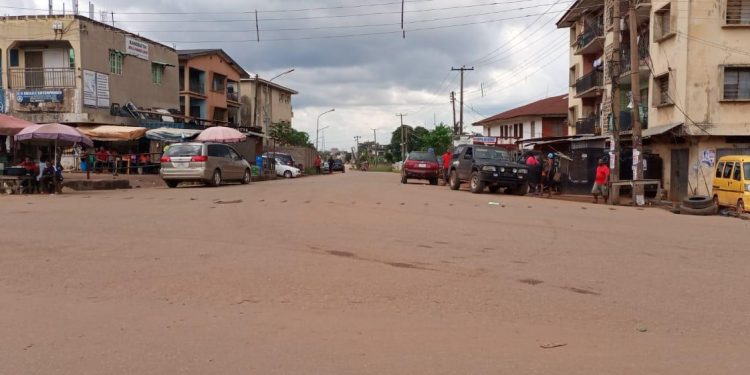 Our correspondent, who visited the area around 11 am, observed that though the Abakpa market was empty, roadside traders and wheelbarrow pushers were seen in large numbers doing their business.

Banks, schools and petrol stations were under lock but public transport buses and auto rickshaws still carried commuters. Private vehicles, though few, were free to move as there was no enforcement of the order.

A police patrol vehicle was stationed at the popular Texaco junction, presumably to maintain law and order.

Young people and the elderly were also observed to have gathered at various drinking spots. Samuel Chukwuma, a man interviewed in a drinking spot in Amangwu Abakpa, said that skipping work for one day will not affect his finances.

Reminded by our reporter that it was the second sit-at-home in a week, with every Monday declared by IPOB a sit-at-home day in the South East, he asked rhetorically: ‘Have we died since then? We are still enjoying life. We are not complaining. Ask them what Buhari is doing in Imo. This is our way of telling him that he is not welcome. He should leave us alone.’

An auto rickshaw operator, Chidozie Nnamani, however, expressed opposition to the protest, saying there was no justification for the sit-at-home order. ‘We cannot continue to suffer ourselves in a bid to get noticed by some people who do not even know that we exist, talk less of how we feed,’ he complained.

‘Now I have three children who must eat. What will I tell them if I don’t come out to work? No, I will tell them that Buhari is visiting Imo and so we are going to fast. Will they understand that? My brother, I don’t like it when people overdo things. We are still battling with Mondays… and they are adding this one.’