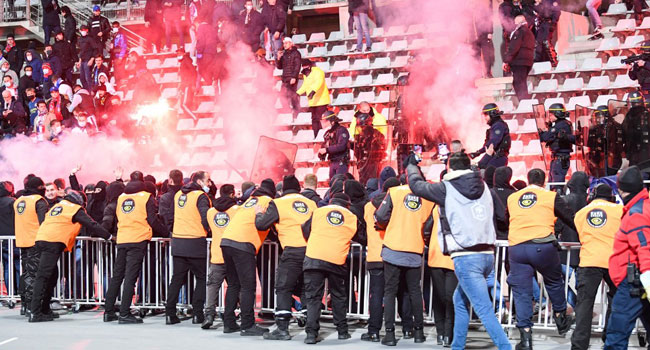 For the second time this season, a match involving Lyon was abandoned following crowd trouble when their French Cup match at Paris FC on Friday was called off after half-time.

The tie was interrupted by incidents in the stands at the Charlety Stadium in Paris as the second half was about to start.

During the break, flares were thrown back and forth between home and visiting fans in one stand. Home-made fireworks also exploded loudly.

As security staff and police streamed towards the stand, spectators fled onto the pitch, preventing the resumption of the match.

The referee and players came out to kick off the second half but returned to the dressing room.

Ten minutes later, the public had returned to the stand after the intervention of the police and stewards and the call for calm from the stadium announcer.

After a delay, the stadium announcer told fans: “In agreement with the authorities the match will not be resumed”.

The French season has been pockmarked by incidents involving fans since the beginning of the season in August.

Lyon have already been ordered to play two games behind closed doors and deducted a league point after their home game on November 21 was abandoned when Marseille’s Dimitri Payet was hit on the head by a bottle thrown from the crowd.

That match is still to be replayed.

The two teams were tied at 1-1. Gaetan Laura had given the hosts an early lead before Moussa Dembele levelled a minute before half-time.